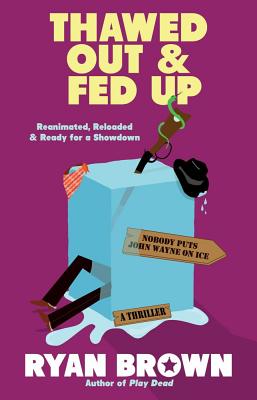 Thawed Out and Fed Up (Paperback)

Sam Bonham—bad husband, deadbeat dad, and possible criminal on the run from the law—wanders out of modern-day East Texas into an ersatz Wild West boomtown created for a movie that never happened.  And when Sam strikes a blow against the gangsters who’ve been terrorizing the town, the locals look to him to save them. He’s no hero, but he’s stumbled upon someone who is: John Wayne. But the John Wayne of this story is not the stalwart lawman of Hollywood films—he’s a seventy-two-year-old man who had himself cryogenically frozen.  He’s weak, bald, frail…and unrecognizable to everyone but Sam.

In The Duke’s “defrosted” state, he’s not entirely himself.  In fact, he believes he’s actually Ethan Edwards, the character he played in The Searchers, one of Wayne’s most beloved films. Ethan or Duke or Marion Morrison, at his side Sam learns how to be a man, and a hero—and a pretty good shot! As he takes on the Old West gang of thugs, he finds that he might have become a family man at last. But back in the real world, someone has his eye on Sam’s wife, and if Sam doesn’t get back soon, the results could be devastating.

Ryan Brown is an actor who has starred on the daytime dramas Guiding Light and The Young and The Restless, and has appeared on Law & Order as well as in feature films for Lifetime Television. He is the author of two novels, Thawed Out & Fed Up and Play Dead. He lives in Manhattan with his wife and children.
or support indie stores by buying on
Copyright © 2020 American Booksellers Association