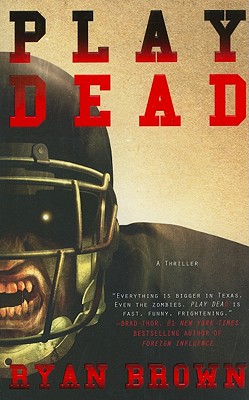 For the first time in Killington High School history, the Jackrabbits football team is one win away from the district championship where it will face its most vicious rival, the Elmwood Heights Badgers. On the way to the game, the Jackrabbits’s bus plunges into a river, killing every player except for bad-boy quarterback Cole Logan who is certain the crash was no accident—given that Cole himself was severely injured in a brutal attack by three ski-masked men earlier that day. Bent on payback, Cole turns to a mysterious fan skilled in black magic to resurrect his teammates. But unless the undead Jackrabbits defeat their murderous rival on the field, the team is destined for hell. In a desperate race against time, with only his coach’s clever daughter, Savannah Hickman, to assist him, Cole must lead his zombie team to victory

. . . in a final showdown where the stakes aren’t just life or death—but damnation or salvation. Boundlessly imaginative and thrillingly satisfying, Play Dead gives small-town Texas an electrifying jolt of the supernatural, and is unquestioningly The Zombie Novel of the Year!

The Comeback Story of the Season . . .

Ryan Brown is an actor who has starred on the daytime dramas Guiding Light and The Young and The Restless, and has appeared on Law & Order as well as in feature films for Lifetime Television. He is the author of two novels, Thawed Out & Fed Up and Play Dead. He lives in Manhattan with his wife and children.
Loading...
or support indie stores by buying on