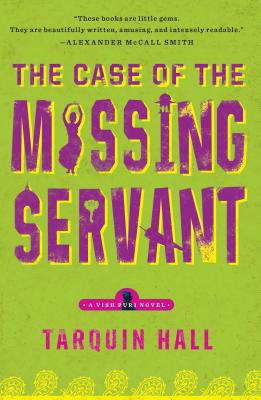 The Case of the Missing Servant

“Vish Puri, Most Private Investigator, is part Hercule Poirot and part Precious Ramotswe -- with a nod to Sherlock Holmes, deploying his team of undercover operatives in Delhi with shrewd skill. He's an old-fashioned, principled man, not afraid of modern technology as it changes the face of India. Irresistible, this quirky story should appeal to readers of every stripe, mystery and non.”
— Barbara Peters, The Poisoned Pen, Scottsdale, AZ
View the List

The first in a detective series that “immediately joins the No. 1 Ladies’ Detective Agency as representing the best in international cozies” (Booklist, starred review).

In hot and dusty Delhi, where call centers and malls are changing the ancient fabric of Indian life, Puri’s main work comes from screening prospective marriage partners, a job once the preserve of aunties and family priests. But when an honest public litigator is accused of murdering his maidservant, it takes all of Puri’s resources to investigate. With his team of undercover operatives—Tubelight, Flush, and Facecream—Puri combines modern techniques with principles of detection established in India more than two thousand years ago, and reveals modern India in all its seething complexity.

Praise For The Case of the Missing Servant: From the Files of Vish Puri, Most Private Investigator…

“Hall turns to fiction with the debut of what promises to be an outstanding series....An excellent, delightfully humorous mystery with an unforgettable cast of characters, The Case of the Missing Servant immediately joins the No. 1 Ladies’ Detective Agency as representing the best in international cozies.”
—Booklist (starred review)

“Speaking of sweet stuff, consider The Case of the Missing Servant by Tarquin Hall. This first novel is set in Delhi, where Vish Puri, found and director of Most Private Investigators, Ltd., performs discreet investigations into the backgrounds of prospective grooms, with surprising and often comic results.”
—Marilyn Stasio, New York Times Book Review

Tarquin Hall is a British author and journalist who has lived and worked throughout South Asia, the Middle East, and Africa. He is the author of The Case of the Missing Servant, The Case of the Man Who Died Laughing, and The Case of the Deadly Butter Chicken, along with dozens of articles and three works of nonfiction, including the highly acclaimed Salaam Brick Lane, an account of a year spent living above a Bangladeshi sweatshop in London’s notorious East End. He lives in Delhi with his wife, Indian-born journalist Anu Anand, and their son.
Loading...
or support indie stores by buying on