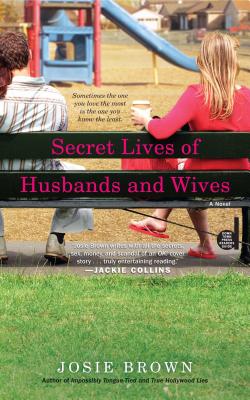 Secret Lives of Husbands and Wives

Suburbia is a jungle, filled with lots of vicious creatures.
Take the Paradise Heights Women’s League board. Lyssa Harper should have warned golden-haired DILF du jour Harry Wilder what he was getting into when she invited him to meet the mommies who run their suburban, gated community. At least he brought cupcakes. Since meeting the former Master-of-the-Universe turned stay-at-home single dad, Lyssa has been his domestic Sherpa, teaching him the ins and outs of suburban life. She just didn’t realize her friends would show up at his house unannounced with casseroles, leopard-print bikini briefs, and plans to rearrange his kitchen cabinets.

The truth is, if Harry and his wife, the neighborhood’s "perfect couple," can call it quits, what does that mean for everyone else? Lyssa’s husband, Ted, is a great father, but he pays her Pilates-pumped momtourage more attention than he does his own wife. Her friends gossip about the neighbors while ignoring their own problems: infertility, infidelity, and eating disorders.

When Harry sets boundaries with his new fan club, he is exiled from the neighborhood’s in-clique. But Lyssa refuses to snub him. What she never expects is the explosive impact her ongoing friendship with Harry will have on her close-knit pals—and on her marriage.

Praise For Secret Lives of Husbands and Wives…

"I loved it! Josie Brown captures the highs and lows of love, lust, and marriage with heart wrenching pathos. I'm recommending it to all my friends as the perfect beach read!" —Lisa Rinna, New York Times bestselling author of Rinnavation

"I loved this juicy-as-it-is-heartfelt novel about love, marriage, friendship—and sharp, manicured claws. Could not put it down!" —Melissa Senate, author of The Secret of Joy

"Hollywood's got nothing on the cast of characters living in the bedroom community of Paradise Heights, who have the secrets, sex, money, and scandal of an OK! Magazine cover story. Josie Brown is a skilled observer whose clever dialogue and feisty style make for truly entertaining reading." —Jackie Collins

"Poignant and funny! Josie Brown’s protagonist is strong, resilient and unflinchingly honest; she has all the skills she needs to navigate the ‘mean streets’ of the gated community of Paradise Heights. A great read!" -- Wendy Wax, author of Magnolia Wednesdays

“Brown proves that a story with suburban bodies can be just as suspenseful as one with dead bodies! Secret Lives of Husbands and Wives is a probing, entertaining fishbowl of married life in a well-heeled, wayward neighborhood. Loved it!” - Stephanie Bond, author of Body Movers

"Fans of DESPERATE HOUSEWIVES will love this story..The quick pace and snappy dialogue make this a fun read."
--Romantic Times

Josie Brown’s celebrity interviews and relationship articles have been featured in Redbook and Complete Woman magazines, as well as AOL, Yahoo, AskMen.com, Divorce360.com, and SingleMindedWomen.com. She lives in Marin County, California with her husband and two children.
Loading...
or
Not Currently Available for Direct Purchase