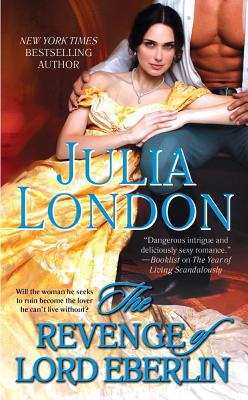 The Revenge of Lord Eberlin

Tobin Scott, otherwise known as Count Eberlin of Denmark, has returned to Hadley Green, the site of his father’s hanging for thievery fifteen years ago. He has but one goal in mind, and that is to avenge his father, who he believes was innocent of stealing the Countess of Ashwood jewels. Now a wealthy man, Tobin intends to exact his revenge by destroying the Ashwood estate and the Countess of Ashwood, who as a young girl testified against his father.

Lily Boudine has become the Countess of Ashwood through a very surprising twist of fate. She is even more surprised when a vaguely familiar looking man calls and tells her he is Tobin Scott, whom she knew as a boy, and that he intends to destroy her or Ashwood. He leaves the choice to her. Because so many people depend on Ashwood, Lily chooses herself, thinking that she can hold him at bay long enough to remove Ashwood from his clutches. But as they play the game of seduction, and she slowly discovers that he is not the cold, heartless man he would like to present to her, she also believes that Tobin is right—his father did not steal the jewels. And if she can find them, she can help restore his family’s honor—but not before she discovers another shocking secret.

Julia London is a New York Times and USA TODAY bestselling author of more than forty romantic fiction novels. She is the recipient of the RT Book Reviews Award for Best Historical Romance and a six-time finalist for the prestigious RITA award for excellence in romantic fiction. She lives in Austin, Texas.
Loading...
or
Not Currently Available for Direct Purchase