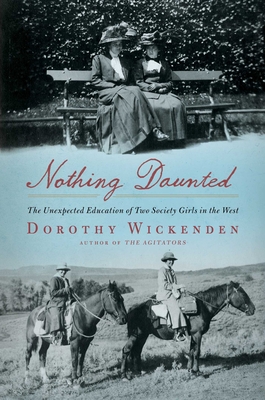 This exhilarating saga about two intrepid young women who leave the affluence of their New York home to teach school on the Western frontier in 1916 is authentically created using actual letters home and interviews with descendants.

Dorothy Woodruff and Rosamond Underwood attended grade school and Smith College together, spent nine months on a grand tour of Europe in 1910, and then, bored with society luncheons and chaperoned balls and not yet ready for marriage, they went off to teach the children of homesteaders in a remote schoolhouse on the Western Slope of Colorado. They traveled on the new railroad over the Continental Divide and by wagon to Elkhead, a tiny settlement far from the nearest town. Their students came to school from miles away in tattered clothes and shoes tied together with string.

Dorothy Woodruff was the grandmother of New Yorker executive editor Dorothy Wickenden. Nearly one hundred years later, Wickenden found the buoyant, detailed, colorful letters the two women wrote to their families. Through them, she has chronicled their trials in the classroom, the cowboys and pioneering women they met, and the violent kidnapping of a close friend. Central to their narrative is Ferry Carpenter, the witty, idealistic, and occasionally outrageous young lawyer and cattle rancher who hired them, in part because he thought they would make attractive and cultivated brides. None of them imagined the transforming effect the year would have—on the children, the families, and the teachers.

Wickenden set out on her own journey to discover what two intrepid Eastern women found when they went West, and what America was like at that uncertain moment, with the country poised for the First World War, but going through its own period of self-discovery.

Drawing upon the letters, interviews with descendants, research about these vanished communities, and trips to the region, Wickenden creates a compelling, original saga about the two intrepid young women and the “settling up” of the West.

"From the elite ethos of Smith College to the raw frontier of northwestern Colorado, two friends dared to defy the conventions of their time and station. Dorothy Wickenden tells their extraordinary story with grace and insight, transporting us back to an America suffused with a sense of adventure and of possibility. This is a wonderful book about two formidable women, the lives they led--and the legacy they left."—Jon Meacham, Pulitzer Prize-winning author of American Lion

“A superb, stirring book. Through the eyes of two spirited and resourceful women from the civilized East, Wickenden makes the story of the American West engaging and personal. A delight to read.”--Susan Orlean, author of The Orchid Thief

"A great story, with a richly appealing character at the center...a tale of the triumph of determination over adversity...wonderfully American."--Slate

“Scrupulously researched... Both an entertaining and an edifying read, bringing early 20th-century Colorado to vivid life.”--Bookpage

“Century-old letters composed in the wilds of Colorado by two young schoolteachers provide the backbone of this stirring narrative.”--Newsweek

Dorothy Wickenden is the author of Nothing Daunted and The Agitators and has been the executive editor of The New Yorker since January 1996. She also writes for the magazine and is the moderator of its weekly podcast The Political Scene. A former Nieman Fellow at Harvard, Wickenden was national affairs editor at Newsweek from 1993-1995, and before that was the longtime executive editor at The New Republic. She lives with her husband in Westchester, New York.
Loading...
or
Not Currently Available for Direct Purchase