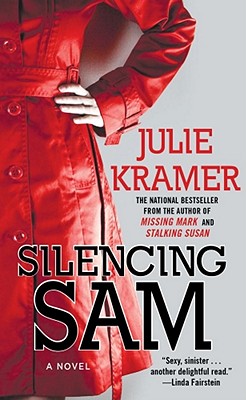 When a widely despised gossip columnist is found shot to death, Riley Spartz must secretly investigate a case in which she becomes the prime suspect. In the wake of the brutal murder, our heroine discovers that news and gossip have more in common than she ever imagined.

Trouble begins when Riley publicly clashes with newspaper gossip writer Sam Pierce, throwing a drink in his face after he implies in his popular column that she cheated on her husband. When clues to the homicide lead to her, Riley is charged with the crime. The police seem unwilling to look any further for perpetrators, although numerous local news- makers have reason for revenge—even a motive for killing.

Praise For Silencing Sam: A Novel…

“This brisk mystery, in which homicide is leavened with deadpan humor, makes a worthy entry in a winning series.” —Booklist


“Silencing Sam has a sexy protagonist, a sinister plot, and delivers another delightful read in this smart series.” —Linda Fairstein

“The third Riley Spartz book has a smart, independent heroine, clever dialogue, a well-paced plot and an ending that wraps everything up without feeling too pat or clichéd. A perfect summer vacation read, whether readers are familiar with the first two books or not (if not, be sure to rectify that as soon as possible).” -- Romantic Times

Julie Kramer is a journalist turned novelist. She writes a series of thrillers set in the desperate world of TV news. Julie has won the Daphne du Maurier Award for Mainstream Mystery/Suspense, RT Reviewer’s Choice Award for Best First Mystery as well as the Minnesota Book Award. Her work has also been nominated for the Anthony, Barry, Shamus, Mary Higgins Clark, and RT Best Amateur Sleuth Awards. She formerly ran WCCO-TV’s investigative unit before becoming a freelance network news producer for NBC and CBS. She lives with her family in White Bear Lake, Minnesota.