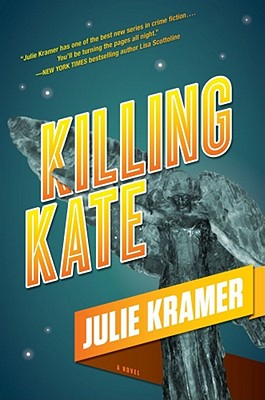 Not all angels are divine…

As TV reporter Riley Spartz discovers a serial killer drawing chalk outlines shaped like angels around the bodies of his victims, she unearths an eerie legend dating back nearly a century. Tracking clues to an Iowa cemetery, Riley finds an infamous Black Angel monument that may be connected to the string of homicides throughout the Midwest. Now she is up against a delusional young man who believes the statue is urging him to kill.

The local police are convinced the killer has left their territory and Riley's boss is convinced viewers are tired of hearing about so much crime, but a personal connection with the latest victim, Kate Warner, makes Riley determined to solve the case.

Riley also gets the scoop on a dog left locked in a hot car. Her pet-loving news director is crazy about this story, but the dog owner goes crazy, too. Is he now stalking Riley? Or has the angel-killer put Channel 3's top investigator on his hit list? Yearning for love and ratings, it's unsure whether Riley will find either before the killer finds her.

When she meets a mysterious stranger, Riley must decide whether he is her guardian angel or an angel of death. The answer doesn't come until a graveyard confrontation where the dead are the only witnesses.


Praise For Killing Kate: A Novel…

"With her newest book, Julie Kramer's reputation and following ought to soar. This wonderfully sardonic look at murder is not only surprisingly poignant, but a flat-out tour de force of harrowing twists and turns."
—New York Times bestselling author William Kent Krueger

"Julie Kramer has one of the best new series in crime fictions....You'll be turning the pages all night." --New York Times bestselling author Lisa Scottoline

"Julie Kramer's Killing Kate offers everything a novel should—a most engaging protagonist, page-turning thrills, plot twists, and a host of characters that jump off the page. I loved it!"
—New York Times bestselling author Heather Graham

“Kramer tells the tale from both Riley's and the killer's points of view, and this strategy . . . keeps the pages turning. . . . Kramer gives readers a strong sense of a reporter's daily routine, drawing in details of other news stories and Riley's personal life to add texture to the novel." - Booklist

“The fourth Riley Spartz mystery by Minnesota author Julie Kramer is her best yet...The writing is so crisp, it will keep readers turning the pages. TV reporter-investigative journalist Spartz is at her feistiest, the dialogue is at its sharpest and the main plot is chillingly suspenseful. There's plenty of action and a jaw-dropping penultimate scene that sets up the potential for another book in the series.” —Associated Press

Julie Kramer is a journalist turned novelist. She writes a series of thrillers set in the desperate world of TV news. Julie has won the Daphne du Maurier Award for Mainstream Mystery/Suspense, RT Reviewer’s Choice Award for Best First Mystery as well as the Minnesota Book Award. Her work has also been nominated for the Anthony, Barry, Shamus, Mary Higgins Clark, and RT Best Amateur Sleuth Awards. She formerly ran WCCO-TV’s investigative unit before becoming a freelance network news producer for NBC and CBS. She lives with her family in White Bear Lake, Minnesota.