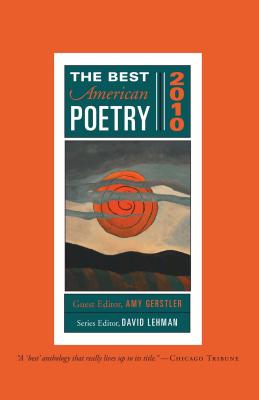 AMY GERSTLER’S COMMITMENT TO INNOVATIVE POETRY that conveys meaning, feeling, wit, and humor informs the cross section of poems in the 2010 edition of The Best American Poetry. The works collected here represent the wealth, the breadth, and the tremendous energy of poetry in the United States today. Featuring poems from some of our country’s top bards, including John Ashbery, Anne Carson, Louise Glück, Sharon Olds, and Charles Simic, The Best American Poetry 2010 also presents poems that poignantly capture the current moment, such as the sonnets John Updike wrote to chronicle his dying weeks. And there are exciting poems from a constellation of rising stars: Bob Hicok, Terrance Hayes, Denise Duhamel, Dean Young, and Elaine Equi, to name a very few.

The anthology’s mainstays are in place: It opens with series editor David Lehman’s incisive foreword about the state of American poetry and has a marvelous introduction by Amy Gerstler. Notes from the poets, illuminating their poems and their writing processes, conclude this delightful addition to a classic series.

David Lehman, the series editor of The Best American Poetry, is also the editor of The Oxford Book of American Poetry. His eleven books of poetry include The Morning Line, Playlist, Poems in the Manner Of, New and Selected Poems, When a Woman Loves a Man, and The Daily Mirror. The most recent of his many nonfiction books is One Hundred Autobiographies: A Memoir. He lives in New York City and Ithaca, New York.
Loading...
or support indie stores by buying on