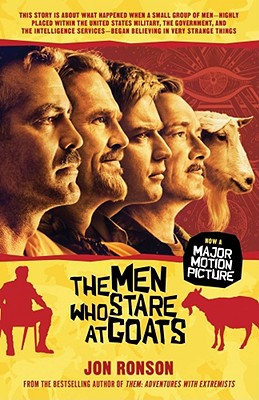 The Men Who Stare at Goats

Now a major film, starring George Clooney, Ewan McGregor, and Jeff Bridges, this New York Times bestseller is a disturbing and often hilarious look at the U.S. military's long flirtation with the paranormal—and the psy-op soldiers that are still fighting the battle.

Bizarre military history: In 1979, a crack commando unit was established by the most gifted minds within the U.S. Army. Defying all known laws of physics and accepted military practice, they believed that a soldier could adopt the cloak of invisibility, pass cleanly through walls, and—perhaps most chillingly—kill goats just by staring at them. They were the First Earth Battalion, entrusted with defending America from all known adversaries. And they really weren’t joking. What’s more, they’re back—and they’re fighting the War on Terror.

An uproarious exploration of American military paranoia: With investigations ranging from the mysterious “Goat Lab,” to Uri Geller’s covert psychic work with the CIA, to the increasingly bizarre role played by a succession of U.S. presidents, this might just be the funniest, most unsettling book you will ever read—if only because it is all true and is still happening today.

Jon Ronson is a documentary filmmaker and the author of Them: Adventures with Extremists. He lives in London.