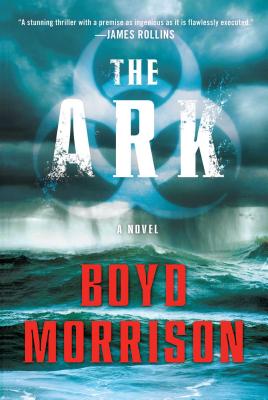 “Can the ancient world still impact the modern? In a resounding 'Yes,' Boyd Morrison relates a story involving Noah's Ark and a modern bioweapon. This fast-paced suspense sweeps two engineers and an archaeologist into the grip of modern day fanaticism. The Ark will take you on a roller coaster ride of plot twists and turns. Highly recommended!”
— Fran Wilson, Colorado State University Bookstore, Fort Collins, CO
View the List

In national bestselling author Boyd Morrison’s debut, the unraveling of one of the greatest archeological mysteries from the bible—Noah’s Ark—could threaten civilization itself in this blockbuster hailed by James Rollins as “a stunning thriller.”

When brilliant archaeologist Dilara Kenner is contacted by Sam Watson, an old family friend who says that he has crucial information about her missing father, Dilara abandons her Peruvian dig and rushes to Los Angeles to meet him. But at the airport, Sam speaks instead of Noah’s Ark—the artifact her father had long been searching for—and the possible death of billions. Before Sam can explain, he collapses. With his dying breath, he urges Dilara to find Tyler Locke—a man she’s never heard of.

Two days later Dilara manages to track down former combat engineer Tyler Locke on an oil rig off Newfoundland. Her helicopter transport goes down well short of the oil rig’s landing pad and Dilara and those aboard nearly drown. No sooner is Dilara safely on the rig than she convinces Tyler the crash was no accident. Tyler agrees to help her uncover the secret behind Noah’s Ark and, more important, her father's disappearance. As the picture begins to come into focus, they realize they have just seven days to find the Ark before its secret is used to wipe out civilization once again.

With a chilling premise and a blistering pace, Boyd Morrison combines all the best elements of a blockbuster thriller with an intelligent and fascinating exploration of one of the Old Testament’s great mysteries.

Praise For The Ark: A Novel…

“Boyd Morrison's novel is a stunning thriller with a premise as ingenious as it is flawlessly executed. Lightning paced, chillingly real, here is a novel that will have you holding your breath until the last page is turned. One of the best debuts I've read this year." —James Rollins

“Mach-speed mayhem. THE ARK crackles with tension and imagination from the first page to the last. Just the right blend of menace and normality. Boyd Morrison is a writer to watch.”
—Steve Berry, New York Times Bestselling Author

“Taut and endlessly exciting, THE ARK is a thrill-a-minute ride across time and continents in search of one of the world’s most fascinating mysteries…From memorable characters to insider information, you’ll love this adventure of a lifetime.”
—Gayle Lynds, New York Times Bestselling Author

Boyd Morrison has a Ph.D. in industrial engineering and has worked for NASA, Microsoft’s Xbox Games Group, and Thomson-RCA. In 2003, he fulfilled a lifelong dream and became a Jeopardy! champion. He is also a professional actor who has appeared in commercials, stage plays, and films. He lives with his wife in Seattle.
Loading...
or
Not Currently Available for Direct Purchase