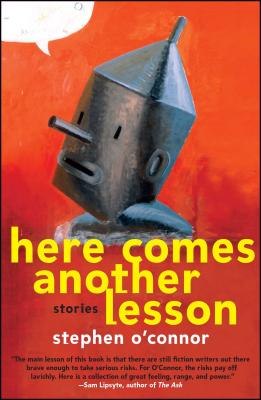 STEPHEN O'CONNOR IS ONE OF TODAY'S MOST GIFTED AND ORIGINAL WRITERS. In Here Comes Another Lesson, O'Connor, whose stories have appeared in The New Yorker, Conjunctions, and many other places, fearlessly depicts a world that no longer quite makes sense. Ranging from the wildly inventive to the vividly realistic, these brilliant stories offer tender portraits of idealists who cannot live according to their own ideals and of lovers baffled by the realities of love. The story lines are unforgettable: A son is followed home from work by his dead father. God instructs a professor of atheism to disseminate updated Commandments. The Minotaur is awakened to his own humanity by the computer-game-playing new girl who has been brought to him for supper. A recently returned veteran longs for the utterly ordinary life he led as a husband and father before being sent to Iraq. An ornithologist, forewarned by a cormorant of the exact minute of his death, struggles to remain alert to beauty and joy. As playful as it is lyrical, Here Comes Another Lesson celebrates human hopefulness and laments a sane and gentle world that cannot exist.

"Highly praised and hotly anticipated…a deeply inventive collection of stories that examine the limitations of modern humanity and morality. O’Connor gives us a portrait of human life and all its harrowing peculiarities that’s equal parts funny, strange and poignant." —Time Out New York

“The impossibility of balancing desire and its fulfillment lies at the center of many of these inventive stories. They range from fabulistic to realistic, and the best ones retain a vague fealty to reality, though the alternate worlds visited are sketched with a skewed, knowing hand, as with 'Ziggurat,' a droll, slightly disorienting account of the Minotaur in his labyrinth… O'Connor is a wizard at engendering sympathy for his characters, who are often simply trying to make sense of situations less certain and comfortable than they might wish.” —Publishers Weekly

“O’Connor’s taste for unusual setups resembles that of George Saunders, but O’Connor is a more bleakly critical writer, and the bulk of his stories seem designed to reveal how ill-equipped we are to deal with mortal concerns….The power in these stories emerges from O’Connor’s style, which can be as controlled and elegant as John Updike’s but which serves a very different purpose.” —Kirkus Reviews

"[T]he best collection of stories I’ve read so far this year... A story about a minotaur and a video-game-obsessed girl bumps against a story about an Iraq War vet’s first difficult day home, both of which are placed alongside a series of seriocomic tales about a 'professor of atheism' arrived in (perhaps) heaven. O’Connor can be satirical, but not in the kind of consistently arch way that marks, say, a George Saunders collection. O’Connor is simply acrobatically capable of finding the style appropriate for each story." —Mark Athitakis’ American Fiction Notes

“The main lesson of this book is that there are still fiction writers out there brave enough to take serious risks. For O'Connor, the risks pay off lavishly. Here is a collection of great feeling, range, and power.” —Sam Lipsyte, author of The Ask

“When an accounting is done of our bravest and most inventive writers of the short story, Stephen O’Connor’s name must certainly be on the list.”—Ben Marcus, author of Notable American Women

“Each story in O'Connor's brilliant collection is a sunrise—a radiant apparition from beyond the outermost limits of ordinary language. Some stories are gritty, realist, and spare; others feel lightning-charged with an otherworldly intensity, shockingly inventive but also frighteningly familiar, surprising, and true.” —Karen Russell, author of St. Lucy’s Home for Girls Raised by Wolves

“'The Professor of Atheism' series in Stephen O'Connor's second collection recurs like a running gag in between the other stories. Each entry launches from a simple premise: Charles, a washed-up, mediocre atheist, finds himself in theological situations. He acquires a pair of angel wings and is born again in the Garden of Eden… Charles is an existential Wile E. Coyote in a series of sublime metaphysical cartoons.” —Paul Constant, The Stranger

“These are amazing, fearless stories—wild dreamscapes that take place in our very own world, with its murderous brutality, impenetrable mystery, and tender beauty. Whether he’s working in the fantastic or the familiar, O’Connor is an artist of the unpredictable, a supreme talent.” —Joan Silber, author of The Size of the World

“‘Love,’ my favorite in this book of wonderful stories, says it all about the author, who exhibits throughout this collection a true mastery of the form; along the way, Mr. O’Connor, in his passion for language and storytelling, not only forms a bond between the reader and himself, but leaves one with a feeling of gratitude—and yes, perhaps, even an affection—for his gifts.” —Oscar Hijuelos, author of Beautiful Maria of My Soul