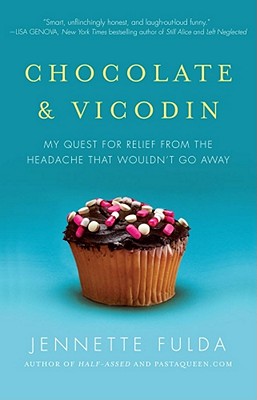 My Quest for Relief from the Headache that Wouldn't Go Away

The humorous and touching memoir of a woman who’s been seeking relief from a headache for more than two years.

Jennette Fulda was riding high on the success of her first book, Half-Assed: A Weight-Loss Memoir, until one fateful day in February 2008, when she developed a headache—and it never went away. So she dealt with it the best way she knows how: by writing about it. And eating lots of chocolate.

In Chocolate and Vicodin, Jennette explores her change of identity from “the girl who lost hundreds of pounds” to “the girl who lives with constant pain,” and all she’s had to endure to try and make the pain stop—from a bevy of expensive, time-consuming tests, which have taught her interesting facts (for example, that an MRI does indeed cost more than a European vacation—and doesn’t last nearly as long), to tons of medications prescribed by her doctors to hilarious, sometimes insane advice she’s received from her blog readers. While nothing’s been able to grant her relief, she has gained a new perspective. Instead of dwelling on the “invisible tiara of nails” she may very well wear for the rest of her life, she’s instead learned how to live with the pain, sharing with readers not only how she’s managed to get by, but to laugh—and thrive—in spite of it.

Jennette Fulda is an author, blogger, and chronic heachache sufferer. Her debut novel, Half-Assed: A Weight-Loss Memoir chronicled her experience of losing weight and was featured on the Today show, The Early Show, The New York Times, Women's Health, Shape, and other media outlets. In 2008, Jennette got a headache that still hasn’t gone away and she wrote about that experience in her humorous memoir, Chocolate & Vicodin. She lives in Indianapolis, Indiana.
Loading...
or support indie stores by buying on