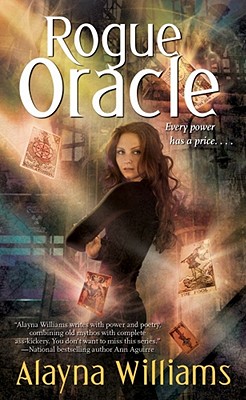 THE MORE YOU KNOW ABOUT THE FUTURE, THE MORE THERE MAY BE TO FEAR.

Tara Sheridan is the best criminal profiler around—and the most unconventional. Trained as a forensic psychologist, Tara also specializes in Tarot card reading. But she doesn’t need her divination skills to realize that the new assignment from her friend and sometime lover, Agent Harry Li, is a dangerous proposition in every way.

Former Cold War operatives, all linked to a top-secret operation tracking the disposal of nuclear weapons in Russia, are disappearing. There are no bodies, and no clues to their whereabouts. Harry suspects a conspiracy to sell arms to the highest bidder. The cards—and Tara’s increasingly ominous dreams—suggest something darker. Even as Tara sorts through her feelings for Harry and her fractured relationship with the mysterious order known as Delphi’s Daughters, a killer is growing more ruthless by the day. And a nightmare that began decades ago in Chernobyl will reach a terrifying endgame that not even Tara could have foreseen. . . .

Alayna Williams has an MA in sociology-criminology (research interests: fear of crime and victimology) and a BA in criminology. She has worked in and around criminal justice since 1997. Although she does read Tarot cards, she’s never used them in criminal profiling or to locate lost scientists. She recently took up astronomy, but for the most part her primary role in studying constellations and dark matter is to follow her amateur astronomer-husband around central Ohio toting the telescope tripod and various lenses. Like the Pythia in Dark Oracle, she’s been known to belly dance. Unlike the Pythia she’d never consider herself a professional.
Loading...
or
Not Currently Available for Direct Purchase