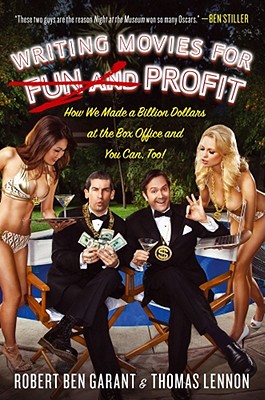 Writing Movies for Fun and Profit

How We Made a Billion Dollars at the Box Office and You Can, Too!

This is the only screenwriting guide by two guys who have actually done it (instead of some schmuck who just gives lectures about screenwriting at the airport Marriott); “These guys are proof that with no training and little education, ANYONE can make it as a screenwriter” (Paul Rudd).

Robert Ben Garant and Thomas Lennon’s movies have made over a billion dollars at the box office—and now they show you how to do it yourself! This book is full of secret insider information about how to conquer the Hollywood studio system: how to write, pitch, structure, and get drunk with the best of them. Well…maybe not the best of them, but certainly the most successful. (If you’re aiming to win an Oscar, this is not the book for you!) But if you can type a little, and can read and speak English—then you too can start turning your words into stacks of money!

This is the only screenwriting book you will ever need (because all other ones pretty much suck). In these pages, Garant and Lennon provide the kind of priceless tips you won’t find anywhere else, including:

• The art of pitching
• Getting your foot in the door
• Taking notes from movie stars
• How to get fired and rehired
• How to get credit and royalties!

And most important: what to buy with the huge piles of money you’re going to make!

Writing Movies for Fun and Profit will take you through the highs and lows of life as a professional screenwriter. From the highs of hugging Gisele Bündchen and getting kung fu punched by Jackie Chan to the soul-crushing lows of Herbie: Fully Loaded.

Read this book and you’ll have everything you need to make your first billion the old-fashioned way—by “selling out” in show business!

A portion of the authors’ proceeds from this book are being contributed to the USO of Metropolitan Washington, a private, nonprofit organization dedicated to serving active duty military members and their families in the greater Washington, DC, region.

Praise For Writing Movies for Fun and Profit: How We Made a Billion Dollars at the Box Office and You Can, Too!…

"These guys are proof that with no training and little education, ANYONE can make it as a screenwriter."
—Paul Rudd

“These guys probably ripped off everything in this book just like they do in all their screenplays. That would explain why it’s actually kind of good.”
—Ed Helms

“Tom and Ben are two of the writers currently working in Hollywood. I can add they make a ‘profit’ on each of their writing jobs, as I believe they have very little overhead. Therefore, they are clearly qualified to write this book. Having not read it, I can tell you that it is uproariously funny, perhaps the best book on writing ever."
—Zak Penn, Film Screenwriter & Director

“Ben and Tom are a great fit for me. I love working with talented writers and then telling people everything was my idea. This is a great book, that I pitched to them a while back... I'm thrilled that they finally got around to writing it.”
—Danny DeVito

“Some screenwriters have a knack for capturing the heart and soul of characters, the nuance of themes, the richness of the human experience. And some are like Tom and Ben.”
—Shawn Levy, Film Director & Producer