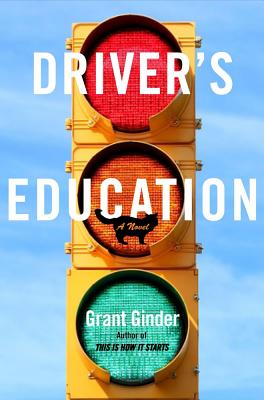 In the tradition of Big Fish, a poignant and eccentric novel about fathers, sons, and the power of stories to change the way we see the world—and the people—around us.

He’s a big man, my granddad, not necessarilyin size or proportion, but in other ways, like the manner in which he lives. The trouble in which he finds himself. The magic that heconjures and the spectacular things he believes.

When he was a younger man, Alistair McPhee was fond of escaping in his ’56 Chevy Bel Air, Lucy, named for the cherished wife who died and left him and their nine-year-old son Colin behind. Yearning for a way to connect to his itinerant father, Colin turned to writing screenplays inspired by the classic films they used to watch together, while Colin’s own son, Finn, grew up listening to his grandfather spin tales of danger, heartbreak, and redemption on the road.

Now, at the end of his life and wishing to feel the wind in his hair one last time, Alistair charges his grandson with a task: bring Lucy to him in San Francisco from New York, where a man named Yip has been keeping her safe. The long road west will lead Finn, accompanied by his disgruntled friend Randal and an ancient three-legged orange cat named Mrs. Dalloway, through the very cities that supposedly bore witness to Alistair’s greatest adventures, offering an unlikely lesson in the differences between facts and truth, between boys and men.

Driver’s Education is at once a literary adventure and a finely detailed family portrait, combining in a bold declaration of Grant Ginder’s outstanding storytelling gifts.

Grant Ginder is the author of This Is How It Starts. He received his MFA from NYU and lives in New York City.

Praise For Driver's Education: A Novel…

"A sensitively observed story about storytelling."

“Ginder’s writing is colorful, direct, and imaginative . . . At times, it is also achingly poignant . . . Driver’s Education is a stirring, memorable trip.”

“Magical realism with a dose of Middle American grit . . . What’s most special here are the novel’s freewheeling style and its willingness to engage big questions: How family stories originate, how they’re warped over time, and what they tell us about ourselves and our heritage.”

“[Ginder] manages to wrap unselfconscious quirkiness up in some very fine writing indeed, without ever sacrificing the story or the characters. A rare feat, in my reading experience, making it one of those—also rare—books I want to read aloud just for the joy of hearing precisely how the words have been strung together.”

“Every once in a while, you read a book that you just can’t shut up about. Driver’s Education is that kind of book.”

“A sentimental story of fathers and sons, the power of imagination, and a hilarious road trip from New York to the West Coast. . . . [Ginder] is a master storyteller.”

“An absorbing look at family history and the stories through which it is told.”

"Ginder, author of the novel This Is How It Starts, conjures an exciting cross-country journey, and an even more exciting journey across the lives and memories of a family."

“Driver’s Education is the kind of book that will make other young writers crumple their manuscripts and unplug their computers. With a sniper's eye, Grant Ginder takes the whole of American Life in his crosshairs. A meticulously-observed family story; a social fiction that involves everything from reality TV to truth-telling in the Internet age; funny and sad, smart and exciting, Driver’s Education is a great book.”
— Darin Strauss

“With Driver's Education, Grant Ginder has come home with more than just the great pleasures—the sites, stops, journeys and stories—of an ideal road trip. He's also given us an exquisite portrait of the mysteries, accusations, and bonds that link every father and son. And he's also given us another sort of education: it's a novel that reminds you how beautiful and moving a story, when told by an expert, can be. The novel gives all the pleasures and reminds us of the real highway we spend our lives on, that wherever we travel begins and ends at the same destination. It's an extraordinary book.”
— David Lipsky

“Drivers Education takes us on a sharply observed, hilarious romp across the country (in a rusty yellow Bel Air named Lucy, copiloted by a three-legged consumptive cat named Mrs. Dalloway) managing all the while to tell a tender, heartfelt story about fathers and sons and storytelling itself. There are lies we tell ourselves while we're out looking for the truth, and Ginder reveals them in all their craggy, impossible complexity. Beautiful.”
— Haley Tanner

“Call them con artists, storytellers, lunatics, or heroes, the characters that fill Ginder’s vast and imaginative world will stay with you long after you’ve put the book down. They’re funny and sad and poignant and true—perfect reflections of our imperfect selves.”
— Karl Taro Greenfeld

“This sweet ride tours the wild and wobbly nature of fiction with the inspired guidance of three generations of the tenderest tale spinners who ever tweaked the facts. It’s funny, warm and smart.”
— Katherine Dunn
or
Not Currently Available for Direct Purchase
Copyright © 2020 American Booksellers Association