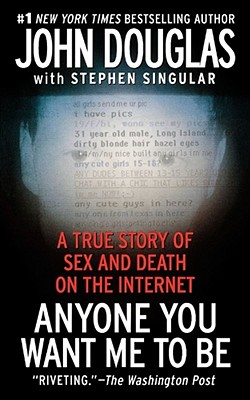 Anyone You Want Me to Be

A True Story of Sex and Death on the Internet

Legendary FBI profiler and #1 New York Times bestselling author John Douglas explores the shocking case of John Robinson, a harmless, unassuming family man whose criminal history began with embezzlement and fraud -- and ended with his arrest for the savage murders of six women and his suspected involvement in at least five disappearances. Most disturbing was the hunting ground in which Robinson seduced his prey: the world of cyberspace. Haunting chat rooms, targeting vulnerable women, and exploiting the anonymity of the Internet, his bloody spree was finally halted by a relentless parole officer who spent ten years trying to nail Robinson as a cold-blooded killer.

A cautionary tale set in a virtual world where relationships are established without the benefit of physical contact, and where mainstream Americans can be drawn down a dark path of temptation and death, Anyone You Want Me To Be is a contemporary real-life drama of high-tech crime and punishment.

Stephen Singular has authored or coauthored seventeen previous books, including numerous New York Times and Los Angeles Times bestsellers. His titles include Presumed Guilty: An Investigation into the JonBenet Ramsey Case, the Media, and the Culture of Pornography; and Anyone You Want Me to Be: A True Story of Sex and Death on the Internet, coauthored with legendary FBI profiler John Douglas. Formerly a staff writer for the Denver Post, he lives in Denver. Visit his website at www.stephensingular.com.
Loading...
or support indie stores by buying on