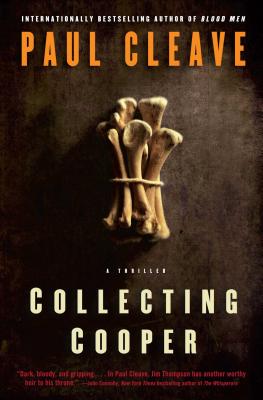 From the international bestselling author of Blood Men comes a gripping new thriller that paints a brutally vivid picture of a killer's mind.

People are disappearing in Christchurch. Cooper Riley, a psychology professor, doesn’t make it to work one day. Emma Green, one of his students, doesn’t make it home. When ex-cop Theodore Tate is released from a four-month prison stint, he’s asked by Green’s father to help find Emma. After all, Tate was in jail for nearly killing her in a DUI accident the year before, so he owes him. Big time. What neither of them knows is that a former mental patient is holding people prisoner as part of his growing collection of serial killer souvenirs. Now he has acquired the ultimate collector’s item—an actual killer.

Meanwhile, clues keep pulling Tate back to Grover Hills, the mental institution that closed down three years ago. Very bad things happened there. Those who managed to survive would prefer keeping their memories buried. Tate has no choice but to unearth Grover Hills’ dark past if there is any chance of finding Emma Green and Cooper Riley alive.

For fans of Dennis Lehane’s Shutter Island, Thomas Harris’ Silence of the Lambs, and Jeff Lindsay’s Dexter series, Collecting Cooper is another “relentlessly gripping, deliciously twisted, and shot through with a vein of humor that’s as dark as hell” (Mark Billingham) novel by this glimmering new talent in the crime thriller genre.

“A pulse-pounding serial killer thriller.... The city of Christchurch becomes a modern equivalent of James Ellroy's Los Angeles of the 1950s, a discordant symphony of violence and human weakness. Cleave tosses in a number of twists that few readers will anticipate, but the book's real power lies in the complexity of its characters, particularly the emotionally tortured Tate.” —Publishers Weekly (starred)

“Paul Cleave writes the kind of dark, intense thrillers that I never want to end. Do yourself a favor and check him out.” —Simon Kernick, internationally bestselling author of Payback

“Collecting Cooper roars on at breakneck speed, pitting not two, but three deadly adversaries against an inexorably ticking clock.” —Bookpage

“Horrormeister Cleave… will scare you to death, or at least to the point of keeping a night light on.” —Kirkus Reviews

Paul Cleave is the internationally bestselling author of ten award-winning crime thrillers, including Joe Victim, which was a finalist for the 2014 Edgar and Barry Awards, Trust No One and Five Minutes Alone, which won consecutive Ngaio Marsh Awards in 2015 and 2016. He lives in Christchurch, New Zealand. Visit his website at PaulCleave.com.