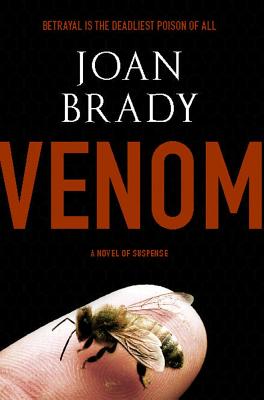 A gripping tale of international corporate intrigue from the award-winning author of Bleedout . . .

ILLINOIS . . . Fresh out of prison, David Marion doesn’t expect a hit man at his door. But when one appears, their meeting is lethal—for the hit man. Who sent him? David has no idea. But warned that a powerful secret organization is after him, he is forced to disappear until he can strike back.

ALABAMA . . . Devastated by the death of her lover, physicist Helen Freyl escapes to her bee farm to care for a colony carrying a unique strain of venom. But when an unexpected job offer from a giant drug corporation arrives, it proves to be a much more intriguing diversion.

LONDON, ENGLAND . . . Helen’s new company is close to a cure for radiation poisoning, but the sudden death of a colleague is followed by another, and Helen begins to doubt the organization’s motives. When she realizes her own life is in danger, what can she do and who can she call on for help?

Venom brings David Marion and Helen Freyl together as they fight for their lives against a backdrop of industrial espionage, corporate greed, and human tragedy in an exhilarating and fast-paced follow-up to the bestselling Bleedout.

Praise For Venom: A Novel of Suspense…

‘Fury oozes from [Joan Brady’s] pen, and has already spawned one bestseller, Bleedout, a thriller in the tradition of John Grisham and Scott Turow. Now it has bred another; Venom, a corporate whodunit involving big pharma, sinister government agencies, corporate criminals and an awful lot of blood’—Independent on Sunday

‘Almost reflective in tone, and elegantly written, Venom should be sipped, not swallowed – but it has a distinctive sting’—Daily Mail

Joan Brady was born in California and danced with New York City Ballet when she was in her twenties. A Phi Beta Kappa graduate of Columbia University, Brady now lives in England where she is an author of short stories; articles; reviews; a highly acclaimed autobiography, The Unmaking of a Dancer, and a novel, Theory of War, for which she became the first woman (and first American) to win the Whitbread Book of the Year Award in 1993. She is also the author of the best-selling novel, The Émigré, and Death Comes for Peter Pan, a fictionalized account of an American medical scandal, both published in the U.K. In 2001, she represented England at the Centenary of the Nobel Peace Prize.
Loading...
or support indie stores by buying on