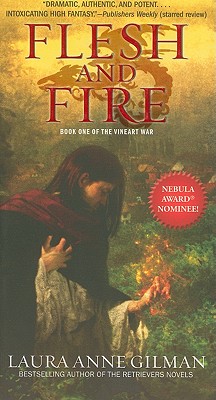 Book One of The Vineart War

Hailed as "something wholly new" and "extraordinary" in starred reviews from Library Journal and Publishers Weekly, Laura Anne Gilman’s Flesh and Fire is as intoxicating as the finest of wines—and as powerful as magic itself.

Once, all power in the Vin Lands was held by the prince-mages, who alone could craft spellwines, and who selfishly used them to their own gain. Now, fourteen centuries after a demigod shattered the Vine, it is the humble Vinearts who know the secret of crafting spells from wines, the source of magic, and they are prohibited from holding power.

But a new darkness is rising in the vineyards, and only one Vineart, Master Malech, senses the coming danger. He has but one weapon to use against it: a young slave named Jerzy, whose origins are unknown, even to him. Yet his uncanny sense of the Vinearts’ craft offers a hint of greater magics within—magics that Malech must cultivate in his new apprentice before time runs out. For if Jerzy cannot unlock the secrets of the spellwines, the Vin Lands will surely be destroyed.

Praise For Flesh and Fire: Book One of The Vineart War…

"A fresh and creative fantasy -- you'll never look at a bottle of Chardonnay the same way again!" -- Karen Miller, bestselling author of the Kingmaker, Kingbreaker duology

Laura Anne Gilman is the author of the Locus bestsellers Silver on the Road and The Cold Eye, the popular Cosa Nostradamus books (the Retrievers and Paranormal Scene Investigations urban fantasy series), the Nebula award-nominated The Vineart War trilogy. Her first story collection is Dragon Virus, and she continues to write and sell short fiction in a variety of genres. Follow her at @LAGilman or LauraAnneGilman.net.
Loading...
or
Not Currently Available for Direct Purchase