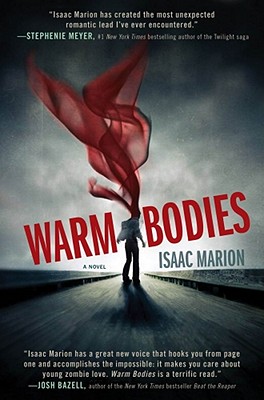 R is a young man with an existential crisis--he is a zombie. He shuffles through an America destroyed by war, social collapse, and the mindless hunger of his undead comrades, but he craves something more than blood and brains. He can speak just a few grunted syllables, but his inner life is deep, full of wonder and longing. He has no memories, noidentity, and no pulse, but he has dreams.

After experiencing a teenage boy's memories while consuming his brain, R makes an unexpected choice that begins a tense, awkward, and stragely sweet relationship with the victim's human girlfriend. Julie is a blast of color in the otherwise dreary and gray landscape that surrounds R. His decision to protect her will transform not only R, but his fellow Dead, and perhaps their whole lifeless world.

Scary, funny, and surprisingly poignant, Warm Bodies is about being alive, being dead, and the blurry line in between.

“I never thought I could care so passionately for a zombie. Isaac Marion has created the most unexpected romantic lead I've ever encountered, and rewritten the entire concept of what it means to be a zombie in the process. This story stayed with me long after I was done reading it. I eagerly await the next book by Isaac Marion.”
— Stephenie Meyer, #1 New York Times Bestselling author of the Twilight series

“Warm Bodies is a terrific book—a compelling literary fantasy which is also a strange and affecting pop-culture parable.”
— Nick Harkaway, author of The Gone-Away World

“Isaac Marion has a great new voice that hooks you from page one and accomplishes the impossible: it makes you care about young zombie love. Warm Bodies is a terrific read.”
— Josh Bazell, New York Times bestselling author of Beat the Reaper

“Has there been a more sympathetic monster since Frankenstein's?”

“It’s got the boarded-up strongholds and mob mentality of Night of the Living Dead—but also romance. As the evil thing resists its evil nature, the book neuters zombies in the same way Stephanie Meyer did vampires.”

“If you haven't caught on to Isaac Marion's writing yet, you're really missing out.”

“In elegant, evocative prose, Marion has fashioned the world’s most unlikely romance in a story that is by turns harrowing, poignant, and tender. At the last, the reader is reminded that we are all ultimately human, whether living or dead. Utterly charming.”

Isaac Marion grew up in the mossy depths of the Pacific Northwest, where he worked as a heating installer, a security guard, and a visitation supervisor for foster children before publishing his debut novel in 2010. Warm Bodies became a #5 New York Times bestseller and inspired a major Hollywood film adaptation. It has been translated into twenty-five languages worldwide. Isaac lives in Seattle with his cat and a beloved cactus, writing fiction and music, and taking pictures of everything. Visit IsaacMarion.com for more on these endeavors.
Loading...
or
Not Currently Available for Direct Purchase