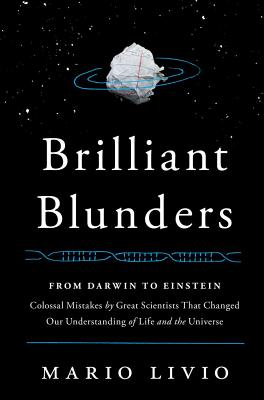 Drawing on the lives of five renowned scientists, Mario Livio shows how even these geniuses made major mistakes and how their errors were an essential part of the process of achieving scientific breakthroughs.

WE ALL MAKE MISTAKES. Nobody’s perfect. Not even some of the greatest geniuses in history, as Mario Livio tells us in this marvelous story of scientific error and breakthrough.

Charles Darwin, William Thomson (Lord Kelvin), Linus Pauling, Fred Hoyle, and Albert Einstein were all brilliant scientists. Each made groundbreaking contributions to his field—but each also stumbled badly. Darwin’s theory of natural selection shouldn’t have worked, according to the prevailing beliefs of his time. Not until Gregor Mendel’s work was known would there be a mechanism to explain natural selection. How could Darwin be both wrong and right? Lord Kelvin, Britain’s leading scientific intellect at the time, gravely miscalculated the age of the earth. Linus Pauling, the world’s premier chemist (who would win the Nobel Prize in chemistry) constructed an erroneous model for DNA in his haste to beat the competition to publication. Astrophysicist Fred Hoyle dismissed the idea of a “Big Bang” origin to the universe (ironically, the caustic name he gave to this event endured long after his erroneous objections were disproven). And Albert Einstein, whose name is synonymous with genius, speculated incorrectly about the forces that hold the universe in equilibrium—and that speculation opened the door to brilliant conceptual leaps. These five scientists expanded our knowledge of life on earth, the evolution of the earth itself, and the evolution of the universe, despite and because of their errors. As Mario Livio luminously explains, the scientific process advances through error. Mistakes are essential to progress.

Brilliant Blunders is a singular tour through the world of science and scientific achievement—and a wonderfully insightful examination of the psychology of five fascinating scientists.

Praise For Brilliant Blunders: From Darwin to Einstein - Colossal Mistakes by Great Scientists That Changed Our Understanding of Life and the Universe…

“Mario Livio sets the discoveries of five great scientists who were also remarkable personalities in their social context, showing how they emerged from confusion and controversy. His archival research allows him to debunk several myths that have been given currency through less thorough biographies. You don’t need to be a scientist to be fascinated by this scholarly, insightful and beautifully written book.”
— Martin Rees, Astronomer Royal and author of From Here to Infinity: A Vision for the Future of Science

“After reading Livio's account, I look on the history of science in a new way. In every century and every science, I see brilliant blunders.”
— Freeman Dyson

"Scientists make mistakes all the time, but those bumps in the road are often smoothed out in the legends that surround the greatest discoverers. . . . Thoughtful, well-researched and beautifully written, Brilliant Blunders offers a distinctive — and far more truthful — perspective on the journey to scientific discovery."
— Marcia Bartusiak

“Enlightening. . . . For many people, being a great scientist means being above error. . . . Livio’s book is a valuable antidote to this skewed picture. . . . Thanks to his deep curiosity, Livio turns Brilliant Blunders into a thoughtful meditation on the course of science itself."
— Carl Zimmer

“It is said that genius is the ability to make all possible mistakes in the least amount of time. Livio’s genius is to show us just how much those mistakes have taught us.”
— Adam Riess, Thomas Barber Professor of Physics and Astronomy, Johns Hopkins University, Nobel Laureate in Physics 2011

“Taking risks is part of genius, and genius is not immune to bloopers. Mario Livio's Brilliant Blunders leads us through the circumstances that surrounded famous gaffes. . . . Mr. Livio helps us see that such spectacular errors are opportunities rather than setbacks.”
— Dr. Francis Collins, director of the National Institutes of Health

“Mario Livio wears many hats: scientist, sleuth, storyteller. In Brilliant Blunders, a delightful intellectual synthesis, he reminds us that he’s also one of the best science writers in our galaxy.”
— Steven Strogatz, professor of applied mathematics, Cornell University, and author of The Joy of X

“In Brilliant Blunders, Mario Livio leaves no historical detail untold, as we re-walk the error-filled pathways along which human understanding of the universe slowly emerged.”
— Neil deGrasse Tyson, Astrophysicist, American Museum of Natural History, and author of Space Chronicles: Facing the Ultimate Frontier

Mr. Livio is a gifted storyteller. . . .[He] shows how science works partly by feeding on past mistakes: Once recognized, the errors sparked creativity in other scientists. An incorrect view of the world is not simply a mistake; it's a catalyst that leads to better understanding."
— Samuel Arbesman

"At last we have a book specifically devoted to scientific mistakes. . . . For someone who wants the whole story, Livio's book is a page turner."
— Donald Simanek

“One of the most important things that distinguishes science from religion is that in science we (eventually) are happy to change our minds. This is called learning. As Mario Livio eloquently describes in this far-reaching and thoroughly enlightening book, many famous scientific advances involved either false starts or dead ends. In my own field, Einstein is purported to have said that inserting the cosmological constant into his equations of General Relativity was his ‘biggest blunder.’ In hindsight, as we find ourselves living in a Universe whose future may be determined by this quantity, most of us would now pay our eye teeth to have made such blunder!”
— Lawrence M. Krauss, Director of the Origins Project at Arizona State University and Foundation Professor in the School of Earth and Space Exploration

“Entertaining accounts of how five celebrated scientists went wrong. . . . An absorbing, persuasive reminder that science is not a direct march to the truth.”

"Astrophysicist Livio unmasks the flaws in the work of some of our greatest scientific minds in this meditation on the winding, unpredictable path of discovery."
— Anna Kuchment

"Livio's usual knack at making sophisticated concepts accessible has been brought to bear on his book. . . . What comes through clearly, as is one of the author's stated intentions, is that errors are part and parcel of the process and that science progresses, not always despite them, but also through them. . . . With its illustrious characters, interesting ideas and those blunders to marvel at, the book makes a fascinating read."
— Marianne Freiberger

"Wide ranging and entertaining, Brilliant Blunders might be picked up by readers who have been fooled into doing so by the notion of blunders, but they will certainly enjoy it for its brilliance."
— Robert Schaefer

"[Mario Livio is ] one of my favorite authors."
— Dan Brown

The blunders committed by the five geniuses profiled in this book should make us lesser beings feel better about ourselves. Mario Livio, an astrophysicist who writes popular science with Asimovian accessibility, doesn’t want to bring these men down. . . . Knowledge, Livio reminds us, transcends any one individual. It is relentless; in time it overcomes all obstacles, including the shortcomings of the very people dedicated to its advancement."
— Ariel Gonzalez

"You don’t have to be a science scholar to appreciate this book. . . . Brilliant Blunders shows that while scientists make mistakes, they ultimately get things right. And we’d better start paying attention."
— Curt Schleier

"Countless scientists have made major mistakes over the centuries, but Livio wisely focuses on gaffes from just five great minds: Pauling, Darwin, Einstein, astrophysicist Fred Hoyle and William Thomson, also known as Lord Kelvin. . . . Though Livio can only speculate on the reasons behind these errors, his clear and compelling writing reinforces the important contributions each of these men made to their fields. . . . Livio’s ultimate message is that blunders — even big ones — can play a role in scientific discovery."
— Allison Bohac

“The stories of how these blunders came about, and what happened next, are extremely well researched, and they shed a welcome, informative, entertaining and sometimes new light on science as a deeply human activity.”
— Len Fisher

Mario Livio is an internationally known astrophysicist, a bestselling author, and a popular speaker who has appeared on The Daily Show, 60 Minutes, and NOVA. He is the author of the national bestseller Brilliant Blunders and other books. He lives in Baltimore, Maryland.