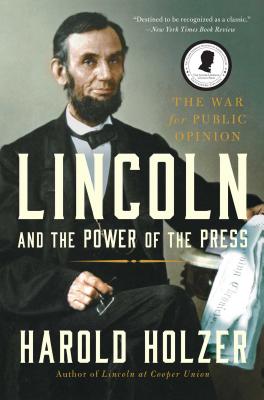 Lincoln and the Power of the Press

The War for Public Opinion

“Lincoln believed that ‘with public sentiment nothing can fail; without it, nothing can succeed.’ Harold Holzer makes a significant contribution to our understanding of Lincoln’s leadership by showing us how deftly he managed his relations with the press of his day to move public opinion forward to preserve the Union and abolish slavery.” —Doris Kearns Goodwin

From his earliest days, Lincoln devoured newspapers. As he started out in politics he wrote editorials and letters to argue his case. He spoke to the public directly through the press. He even bought a German-language newspaper to appeal to that growing electorate in his state. Lincoln alternately pampered, battled, and manipulated the three most powerful publishers of the day: Horace Greeley of the New York Tribune, James Gordon Bennett of the New York Herald, and Henry Raymond of the New York Times.

When war broke out and the nation was tearing itself apart, Lincoln authorized the most widespread censorship in the nation’s history, closing down papers that were “disloyal” and even jailing or exiling editors who opposed enlistment or sympathized with secession. The telegraph, the new invention that made instant reporting possible, was moved to the office of Secretary of War Stanton to deny it to unfriendly newsmen.

Holzer shows us an activist Lincoln through journalists who covered him from his start through to the night of his assassination—when one reporter ran to the box where Lincoln was shot and emerged to write the story covered with blood. In a wholly original way, Holzer shows us politicized newspaper editors battling for power, and a masterly president using the press to speak directly to the people and shape the nation.

Praise For Lincoln and the Power of the Press: The War for Public Opinion…

WINNER OF THE 2016 GOLDSMITH BOOK PRIZE

“Lincoln believed that ‘with public sentiment nothing can fail; without it, nothing can succeed.’ Harold Holzer makes a significant contribution to our understanding of Lincoln’s leadership by showing us how deftly he managed his relations with the press of his day to move public opinion forward to preserve the Union and abolish slavery.”
— Doris Kearns Goodwin

“. . . a monumental, richly detailed portrait of the world of 19th-century journalism and Lincoln’s relation to it. . . . Full of fresh information and superb analysis, Holzer’s engaging, deeply researched book is destined to be recognized as a classic account of Civil War-era journalism and the president who both swayed it and came under its sway.”
— The New York Times Book Review

“Harold Holzer has written a fascinating study about Abraham Lincoln’s extraordinary legacy to American journalism. Eye-opening, scholarly, and provocative, Lincoln and the Power of the Press adds greatly to our understanding of the presidency and its relationship to the 4th Estate.”
— Amanda Foreman

“At no time in our history did newspapers wield more political influence than during the Civil War era, and no political figure was more aware of this influence than Abraham Lincoln. Harold Holzer’s compelling narrative of the intertwined world of politics and journalism demonstrates Lincoln’s canny skill in using the press to advance his own career as well as the cause of Union and freedom. A tour de force.”
— James M. McPherson

“A fascinating story that captures the brawling spirit of the American press in its bare-knuckled infancy and reveals a Lincoln that few of us have seen before.”
— Wall Street Journal

“Fascinating . . . The result is three books in one: a political biography of Lincoln written by a scholar who is among the most prolific chroniclers of the 16th president, a superb and engaging portrayal of the American press during a crucial moment in its history and that of the nation, and a riveting account of the intersection between a man redefining the presidency and a press establishing its modern role.”
— Washington Post

“Only by showing us what Lincoln was up against can Holzer measure the man’s achievement in using, controlling, or defying the one news medium of the time, the newspaper.”
— New York Review of Books

“Holzer richly captures an era when journalism was practiced in ways that we can now scarcely recognize.”
— Columbia Journalism Review

“[Holzer] has drawn on a lifetime of experience and study to produce the definitive work on the subject… Holzer offers an important perspective on the war and has unearthed fresh material… Lincoln and the Power of the Press deserves a wide audience and a place on the list of essential Civil War books.”
— America's Civil War

“Harold Holzer mines a worthy vein in the study of Lincoln's link to modernity. The book colorfully details how Honest Abe was also something of a Great Manipulator, skillfully managing the press of 19th-century America in his efforts to end slavery and save the Union. . . . Holzer reminds us that, from its earliest days, the American press was more of a partisan rabble than a bastion of objective reporting. . . . At the core of Holzer's history is Lincoln's parrying with the era's three most powerful publishers . . . this is the story of those famous men as much as it is another angled view of Lincoln.”
— USA TODAY

“Holzer, the acclaimed Lincoln scholar, illustrates that the often symbiotic relationship between the press and various politicians and parties had reached an unprecedented level during the era of the Civil War…a well-written reminder that the independence of the press, then as now, has its limits.”
— Booklist

“In this engaging history of one of the most divisive periods in American politics, the buildup to the Civil War, Lincoln historian Holzer (The Civil War in 50 Objects, 2013, etc.) tracks how the great political clashes played out in the lively press of the day, creating not-so-delicate marriages between politicians and the journalists writing the 'news' (which was more opinion than actual news) . . . An exhaustive feat of research with a focused structure and robust prose.”
— Kirkus Reviews

“With his usual sparkling prose and exhaustive research, one of America’s foremost scholars on the 16th president has given us a robust portrait of the nexus between American politics and the press. As much as it is a telling slice of Lincolniana — the kind of detail-rich tapestry we have come to expect from Holzer — it is also a lively history of mid-19th century journalism. . . . Holzer reveals an encyclopedic knowledge of the players.”
— John Bicknell

“Lincoln authority Harold Holzer’s latest book is . . . about the power of the new national press and a president’s herculean effort to use it to mold public opinion during the most politically divided period in our history.”
— The Buffalo News

“Holzer has produced three books in one: apolitical biography of Lincoln, a portrayal of the American press during acrucial moment in history and an account of how Lincoln and the press eachhelped redefine the other.”
— James McGrath Morris

“Harold Holzer . . . may know more about Abraham Lincoln than any other living person, and it shows in his fascinating study of Lincoln’s relations with the press barons of his time. . . . A particularly valuable study for the light it shines on the openly partisan character of the American press in the mid-nineteenth century. . . . an important study—and among the best that we now have—of the partisan press during the sectional crisis and the Civil War era. . . . A richly rewarding [book] for the mass of detail it contains and the conclusions the author draws from it regarding the overlapping worlds of politics and journalism.”
— The New Criterion

“In this magisterially written and meticulously researched book, the overall portrait is one of a president who understood that he had to manipulate the press to manage the public.”
— The Dallas Morning News

“[Holzer] impressively examines the layers of Lincoln’s deft handling of reporters. He tells the story of Lincoln’s own foray into journalism, an area of Lincoln’s prewar years often overlooked or ignored. . . . highly recommended.”
— Civil War News

Harold Holzer, a leading authority on Lincoln and the Civil War, is Chairman of the Abraham Lincoln Bicentennial Foundation and a Roger Hertog Fellow at the New York Historical Society. Widely honored for his work, Holzer earned a second-place Lincoln Prize for Lincoln at Cooper Union in 2005 and in 2008 was awarded the National Humanities Medal. Holzer is Senior Vice President of The Metropolitan Museum of Art, and lives in Rye, New York.
Loading...
or support indie stores by buying on