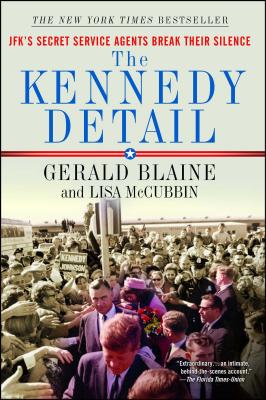 The New York Times bestselling and extraordinary true story of the critical events leading up to and following the assassination of President John F. Kennedy, as told by the Secret Service agents who were firsthand witnesses to one of America’s greatest tragedies.

The Secret Service. An elite team of men who share a single mission: to protect the president of the United States. On November 22, 1963, these men failed—and a country would never be the same. Now, for the first time, a member of JFK’s Secret Service detail reveals the inside story of the assassination, the weeks and days that led to it and its heartrending aftermath. This extraordinary book is a moving, intimate portrait of dedication, courage, and loss.

As a Special Agent of the Secret Service on the White House Detail, Gerald “Jerry” Blaine had the privilege of serving three U.S. presidents during one of the most tumultuous times in American history.  After resigning from the Secret Service following John F. Kennedy’s assassination, Blaine embarked on a career path with IBM Corporation and became a leading expert in high-level security, lecturing worldwide on the use of computers in Criminal Justice and Intelligence. In 1990, Blaine retired from IBM and joined ARCO International Oil and Gas in Dallas, Texas as the Director of International Security, Government Relations and Foreign Affairs. After retiring from ARCO in 1999 Blaine spent four years with Hill & Associates, an Asian-based consulting company, as a Senior Consultant, and finally retired from the corporate world in 2003.  He now lives in in Grand Junction, Colorado with Joyce, his wife of more than fifty years. The couple has two children and four grandchildren.

Lisa McCubbin Hill is an award-winning journalist and New York Times bestselling author. She is the author of the acclaimed biography Betty Ford: First Lady Women’s Advocate, Survivor, Trailblazer and coauthor (with Clint Hill) of the New York Times bestsellers Mrs. Kennedy and Me; Five Days in November; and Five Presidents: My Extraordinary Journey with Eisenhower, Kennedy, Johnson, Nixon, and Ford. She met Clint Hill while writing her first book, The Kennedy Detail: JFK’s Secret Service Agents Break Their Silence (with Gerald Blaine). Previously, Lisa was a television news anchor, reporter, and talk-radio host. After September 11, she was a freelance writer in Saudi Arabia and Qatar. In 2021, Lisa McCubbin married coauthor Clint Hill. Visit her at LisaMcCubbin.com.

Clint Hill is the New York Times bestselling author of Mrs. Kennedy and Me; Five Days in November; and Five Presidents: My Extraordinary Journey with Eisenhower, Kennedy, Johnson, Nixon, and Ford. A United States Secret Service Agent from 1958 to 1975, Clint Hill was assigned to First Lady Jacqueline Kennedy and was in the motorcade in Dallas on November 22, 1963, when President John F. Kennedy was assassinated. For his courage and swift actions that day, Hill received the nation’s highest civilian award for bravery. Starting out as a Special Agent, Clint Hill served as Agent in Charge of the First Lady Detail, the Vice Presidential Protective Division, the Presidential Protective Division, and when he was retired in 1975, he was Assistant Director responsible for all protective activity. Hill married coauthor Lisa McCubbin in 2021. Find out more at ClintHillSecretService.com.
Loading...
or support indie stores by buying on