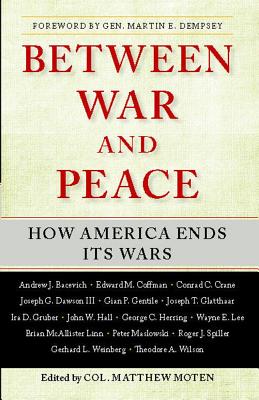 Between War and Peace

How America Ends Its Wars

Now in paperback, Between War and Peace is “a set of essays devoted to the shadowy ground on which the guns have ceased their roar, but could resume at any moment” ( Kirkus Reviews ).

As the United States attempts to extricate itself from two long and costly wars in Iraq and Afghanistan, nothing could be more vital than a thorough examination of the way America has ended its major conflicts in the past.

As it fills an important gap in military history, Between War and Peace is bound to be a pillar of military academy and college curricula. The book presents fifteen essays by leading American historians, each of which deals in fascinating detail with the aims of these wars, their predominant strategies, their final campaigns, the course and causes of termination, and their ramifications for the nation’s future. Taken together, they will be a groundbreaking addition to the canon of military history.

A formidable, collaborative effort that illuminates the past in ways that will help us understand our troubled present, Between War and Peace takes readers inside some of American history’s most important turning points.

Praise For Between War and Peace: How America Ends Its Wars…

“Making sense of the headlines…A set of essays devoted to the shadowy ground on which the guns have ceased their roar, but could resume it at any moment. . . . Of considerable interest to students of military history, strategy, tactics and geopolitics.”
—Kirkus Reviews

Colonel Matthew Moten is professor and deputy head of the Department of History at the United States Military Academy.  A graduate of West Point, he has served in the U.S. Army for over twenty-seven years, including assignments in the Pentagon, Germany, Kuwait, and Iraq.  He specializes in the history of American political-military relations.  His recent publications include an essay entitled “A Broken Dialogue: Rumsfeld, Shinseki, and Civil-Military Tension,” in American Civil-Military Relations: The Soldier and the State in a New Era (Johns Hopkins University Press, 2009) and a short monograph entitled The Army Officer’s Professional Ethic—Past, Present and Future (Strategic Studies Institute, February 2010).  He is currently writing a history of American political-military relations.  Colonel Moten holds a doctorate in history from Rice University and is author of The Delafield Commission and the American Military Profession (Texas A&M Press, 2000).  He and his wife Margaret have two grown children, Stephanie and Marshall.
Loading...
or support indie stores by buying on