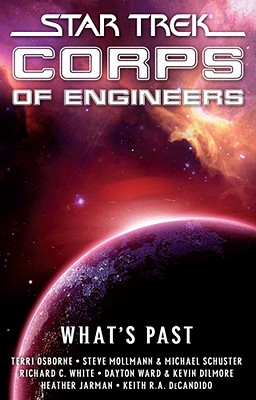 Before they became the crack team of engineers we’ve all come to know and love on the U.S.S. da Vinci, the Starfleet Corps of Engineers team had plenty of adventures throughout the galaxy. Now some of those exploits are chronicled, featuring special guests from all across the Star Trek universe.

Echoes of Coventry: During the height of the Dominion War, Bart Faulwell is part of a team that must crack Cardassian codes.

Distant Early Warning: In the 23rd century, the U.S.S. Lovell helps in the construction of Starbase Vanguard in this special prequel to the hit novel series.

10 Is Better than 01: An inside look at the culture of Bynaus, home of 110—the future Soloman.

Many Splendors: Before they were reunited on the da Vinci, Sonya Gomez and Kieran Duffy had a whirlwind romance aboard the Starship Enterprise.

TERRI OSBORNE made her professional fiction writing debut in 2003 with the critically acclaimed “Three Sides to Every Story,” the Jake Sisko and Tora Ziyal story in the Star Trek: Deep Space Nine tenthanniversary anthology, Prophecy and Change. Her other fiction work includes “ ‘Q’uandary,” the Selar story in the Star Trek: New Frontier anthology No Limits; Star Trek: S.C.E.: Malefictorum, the landmark fiftieth installment in the series; and “Eighteen Minutes” in the tenth-anniversary anthology Star Trek: Voyager: Distant Shores. Beyond that, she is hard at work at more fiction, both in and out of the Star Trek universe, including an original dark fantasy novel set in Dublin, Ireland in 1940. Find out more about Terri at her Web site: www.terriosborne.com.

STEVE MOLLMANN is studying for a Ph.D. in English at an unknown university at an unknown location in the United States. He is not being coy; at the time this was written, he simply had no idea where he would be by the time you read this. He obtained his M.A. in English at the University of Connecticut, and hopes to pursue a career as a scholar, specializing in British literature, especially its intersection with science and technology. Also in that gap of time, he will have gotten married to his then-fiancée, Hayley. He has met Michael Schuster on more than one occasion.

MICHAEL SCHUSTER lives in a picturesque Austrian mountain valley, with half a continent and one entire ocean between him and Steve Mollmann. A bank employee by day, he likes to come up with new (or at least relatively unused) ideas that can be turned into stories with loving care and the occasional nudge. With Steve, he is the co-author of two short stories in the anthology Star Trek: The Next Generation: The Sky's the Limit. Their first novel, The Tears of Eridanus, will be released as part of the collection Star Trek: Myriad Universes: Shattered Light this December. Currently, the two are hard at work building their own universe-sized sandbox to play in. More information about them (including annotations for The Future Begins) can be found at http://www.exploringtheuniverse.net/.

Richard C. White is a fantasy and science fiction author who has written for Star Trek, Doctor Who, and The Incredible Hulk. His novel Gauntlet Dark Legacy was the bestselling tie-in for his publisher in 2004.

Kevin Dilmore has teamed with author Dayton Ward for fifteen years on novels, shorter fiction, and other writings within and outside the Star Trek universe. His short stories have appeared in anthologies including Native Lands by Crazy 8 Press. By day, Kevin works as a senior writer for Hallmark Cards in Kansas City, Missouri. A graduate of the University of Kansas, Kevin lives in Overland Park, Kansas.

Keith R.A. DeCandido was born and raised in New York City to a family of librarians. He has written over two dozen novels, as well as short stories, nonfiction, eBooks, and comic books, most of them in various media universes, among them Star Trek, World of Warcraft, Starcraft, Marvel Comics, Buffy the Vampire Slayer, Serenity, Resident Evil, Gene Roddenberry’s Andromeda, Farscape, Xena, and Doctor Who. His original novel Dragon Precinct was published in 2004, and he's also edited several anthologies, among them the award-nominated Imaginings and two Star Trek anthologies. Keith is also a musician, having played percussion for the bands Don't Quit Your Day Job Players, Boogie Knights, and Randy Bandits, as well as several solo acts. In what he laughingly calls his spare time, Keith follows the New York Yankees and practices kenshikai karate. He still lives in New York City with his girlfriend and two insane cats.

Heather Jarman lives in Portland, Oregon, where she supplements her day job as a tired mommy with her writing career. Her most recent contributions to the Star Trek fiction include "The Officers' Club," the Kira Nerys story in Tales from the Captain's Table, and Paradigm, the Andor novel in Worlds of Star Trek: Deep Space Nine, Volume One.

By night Heather flies to distant lands on black ops missions for the government, where she frequently breaks open industrial-strength cans of whupass on evildoers.
Loading...
or support indie stores by buying on