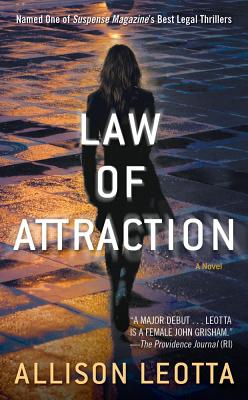 IT’S THE BIGGEST CASE OF HER CAREER. BUT IF SHE WINS IT, SHE COULD LOSE EVERYTHING.

The victim she tried to protect is dead. Her lover—no, her ex-lover—is defending the accused killer. For domestic-violence prosecutor Anna Curtis, all of her cases are important—but this one is personal. This time, nothing will stop her from bringing the defendant to justice. Unless he kills her first.

From the gilded lobbies of Washington’s most powerful law firms to the darkened alleys of its poorest neighborhoods, Law of Attraction is a fascinating glimpse inside the most emotional cases of D.C.’s criminal justice system.

“This is a major debut, and Leotta is a female John Grisham."


“With this riveting debut legal thriller, Leotta joins the big leagues with pros like Lisa Scottoline and Linda Fairstein. A vulnerable, tenacious heroine, surprising twists and turns, and equal parts romance and danger are a recipe for success. Readers will feverishly hope for a second book.”


“A beautifully written and suspenseful debut, offering not only an inside look at crime and the courts in DC, but an exploration of the family dynamics that affect so much of who we are and what we do.”