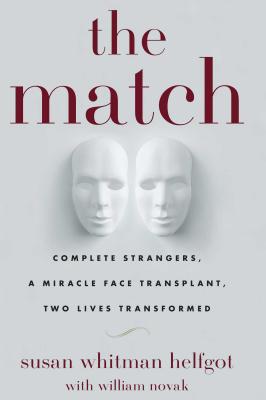 Joseph Helfgot, the son of Holocaust survivors, worked his way from a Lower East Side tenement to create a successful Hollywood research company. But his heart was failing. After months of waiting for a heart transplant, he died during the operation.

Hours after his death, his wife Susan was asked a shocking question: would she donate her husband’s face to a total stranger?

The stranger was James Maki, the adopted son of parents who spent part of World War II in an internment camp for Japanese Americans. Rebelling against his stern father, a professor, by enlisting to serve in Vietnam, he returned home a broken man, addicted to drugs. One night he fell facedown onto the electrified third rail of a Boston subway track.

A young Czech surgeon who was determined to make a better life on the other side of the Iron Curtain was on call when the ambulance brought Maki to the hospital. Although Dr. Bohdan Pomahac gave him little chance of survival, Maki battled back. He was sober and grateful for a second chance, but he became a recluse, a man without a face. His only hope was a controversial face transplant, and Dr. Pomahac made it happen.

In The Match, Susan Whitman Helfgot captures decades of drama and history, taking us from Warsaw to Japan, from New York to Hollywood. Through wars and immigration, poverty and persecution, from a medieval cadaver dissection to a stunning seventeen-hour face transplant, she weaves together the story of people forever intertwined—a triumphant legacy of hope.

“This book moves so fast you can’t put it down.  It treats all the characters with respect and subtlety as they make their difficult but inspiring decisions.”

—Lee Woodruff, co-author, with Bob Woodruff, of In an Instant

"This is truly an outstanding book! I could not stop reading."

"Magnificent. . . . it’s actually about people. I’ve never read a book so fast before and with such pleasure."

Susan Whitman Helfgot is the widow of Joseph Helfgot, a Hollywood movie marketer who died from complications during heart transplant in April of 2009. She was cast into the national spotlight when a Boston Globe reporter uncovered that her husband had been the donor in a historic transplant operation. In the late 1990s, the former insurance company executive decided to return to her first love, science, returning to college to study astronomy and biology. She co-founded a charter middle school in Los Angeles while pursuing her studies. Her knowledge of biology coupled with a decade as her husband’s caregiver outside and within hospital walls has given her a unique and valuable perspective and Susan has become an outspoken advocate for organ donation. She has presented to national medical conferences and testified before the Commonwealth of Massachusetts legislature, and has appeared on television programs including Good Morning America and Dr. Oz. Susan established the Joseph H. Helfgot Foundation with funds from the sale of The Match: Complete Strangers, a Miracle Transplant, Two Lives Transformed. Projects include Team Heart Rwanda and an ongoing research study about public perceptions concerning face transplantation. The foundation also provides funding support for face transplant medical research. For more information visit Joseph H. Helfgot Foundation. An avid runner and stargazer, Susan lives with her children and cocker spaniel in a suburb of Boston.

William Novak, who was born in 1948, has written or coauthored some two dozen books, including the bestselling memoirs of Lee Iacocca, Tip O’Neill, Nancy Reagan, the Mayflower Madam, Oliver North, Magic Johnson, and Tim Russert.  He is also the coeditor with Moshe Waldoks of The Big Book of Jewish Humor.  He and his wife, Linda, live in the Boston area and have three grown sons, all of whom are writers.
Loading...
or support indie stores by buying on