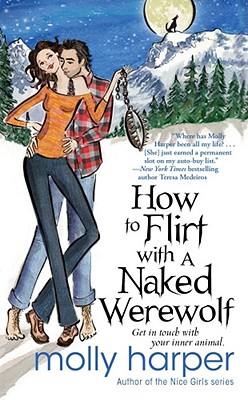 Even in Grundy, Alaska, it’s unusual to find a naked guy with a bear trap clamped to his ankle on your porch. But when said guy turns into a wolf, recent southern transplant Mo Wenstein has no difficulty identifying the problem. Her surly neighbor Cooper Graham—who has been openly critical of Mo’s ability to adapt to life in Alaska—has trouble of his own. Werewolf trouble.

For Cooper, an Alpha in self-imposed exile from his dysfunctional pack, it’s love at first sniff when it comes to Mo. But Cooper has an even more pressing concern on his mind. Several people around Grundy have been the victims of wolf attacks, and since Cooper has no memory of what he gets up to while in werewolf form, he’s worried that he might be the violent canine in question.

If a wolf cries wolf, it makes sense to listen, yet Mo is convinced that Cooper is not the culprit. Except if he’s not responsible, then who is? And when a werewolf falls head over haunches in love with you, what are you supposed to do anyway? The rules of dating just got a whole lot more complicated. . . .

Molly Harper is the author of two popular series of paranormal romance, the Half-Moon Hollow series and the Naked Werewolf series. She also writes the Bluegrass ebook series of contemporary romance. A former humor columnist and newspaper reporter, she lives in Michigan with her family, where she is currently working on the next Southern Eclectic novel. Visit her on the web at MollyHarper.com.

"Where has Molly Harper been all my life?...[She] just earned a permanent slot on my auto-buy list."
—New York Times bestselling author Teresa Medeiros
or
Not Currently Available for Direct Purchase
Copyright © 2020 American Booksellers Association