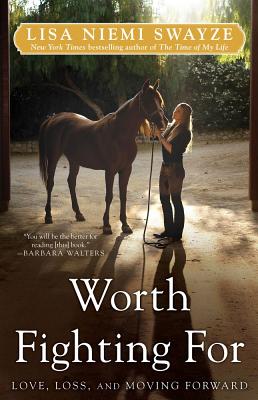 From the author of The Time of My Life (written with her husband Patrick Swayze) a remarkable, new account of grief, loss, caregiving, and moving on, with never before revealed stories of the Swayzes’ final months together.

Lisa Niemi and Patrick Swayze first met as teenagers at his mother’s dance studio. He was older and just a bit cocky; she was the gorgeous waif who refused to worship the ground he walked on. It didn’t take long for them to fall in love. Their thirty-four year marriage—which they explored together in The Time of My Life —was a uniquely passionate partnership.

Praise For Worth Fighting For: Love, Loss, and Moving Forward…

"A worthy addition to the canon of literature that honestly assesses grief without sentimentalizing it." —Kirkus

“It’s a heartfelt account, both brave and honorable." —Publisher's Weekly

"Lisa is one of the most honest people I've ever known. It's one of the big reasons Patrick loved her. Read it and you'll see what I mean." —Whoopi Goldberg

"I loved Patrick Swayze and conducted his last television interview before he died. We were joined by the woman he adored, his wife, Lisa. She was soft, tough when she had to be, funny, wise and inspiring. You will be the better for reading her book." —Barbara Walters

“This heartbreaking but bracingly candid book should help comfort anyone going through the loss of a loved one.” —Booklist

Lisa Niemi Swayze is the coauthor of The Time of My Life, which she wrote with her late husband, Patrick Swayze. She wrote, directed, and produced the film One Last Dance in 2004. She has held many film, television, and Broadway roles and in addition, she wrote, directed, and starred in the play Without a Word with her husband, garnering six Drama Critics Awards.
or
Not Currently Available for Direct Purchase