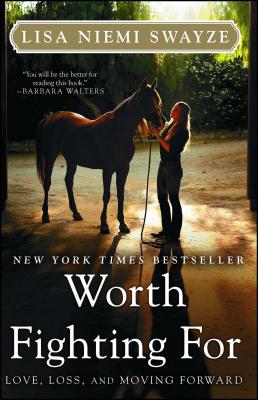 From Patrick Swayze’s widow—the moving, New York Times bestselling account of grief, loss, caregiving, and moving on, with touching stories from their final months together.

When Lisa Niemi first exchanged vows with Patrick Swayze, she promised to be with her husband “till death do us part.” But how many couples stop and think about what that truly means?

Worth Fighting For is both a candid tribute to a marriage and a celebration of the healing power that each day holds, even in the most difficult of circumstances. Lisa shares the details of Patrick’s twenty-one-month battle with Stage IV pancreatic cancer, and she describes his last days, when she simply tried to keep him comfortable. She writes with heartbreaking honesty about her grief in the aftermath of his death and openly discusses the challenges that the years without him have posed. Her story is an emotionally honest and unflinching depiction of loss, but it is also a hopeful and life-affirming exploration of the power of the human spirit. “I tell you, I am a different person now,” she writes, “one who has been thrown into the fire and forged.”

Lisa Niemi Swayze is the coauthor of The Time of My Life, which she wrote with her late husband, Patrick Swayze. She wrote, directed, and produced the film One Last Dance in 2004. She has held many film, television, and Broadway roles and in addition, she wrote, directed, and starred in the play Without a Word with her husband, garnering six Drama Critics Awards.
or support indie stores by buying on