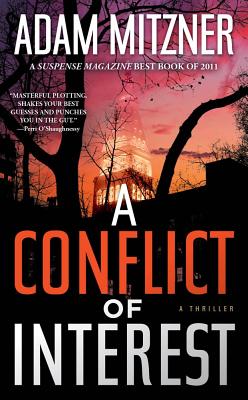 A Conflict of Interest

“Alex Miller is a young criminal defense attorney and recent partner in a powerful NYC law firm. At his father's funeral, Michael Ohlig introduces himself as a longtime family friend and asks Alex to represent him in a criminal investigation involving a brokerage scam that left his investors penniless. While investigating evidence being presented by the prosecution, Alex discovers facts that lead to old family secrets and lies. Desperation may lead to the truth, but deception can come at a high price. Twists in the final pages of this thriller will keep readers on the edge.”
— Carol Hicks, Bookshelf At Hooligan Rocks, Truckee, CA
View the List

A stunning debut suspense novel in the bestselling tradition of Scott Turow and John Grisham—from a “gifted writer” with a “long and successful career ahead of him” (Publishers Weekly, starred review).

At thirty-five, criminal defense attorney Alex Miller is the youngest partner at New York City’s most prestigious law firm, with the life he’s always dreamed of. When Alex’s father suddenly passes away, Alex is introduced to Michael Ohlig, a rich and powerful man who holds an almost mythical place in his family lore. But Alex is surprised when Ohlig admits that he’s in serious legal trouble, accused of a high-profile financial scam involving hundreds of millions of dollars.

When Alex takes on Ohlig’s defense, secrets are revealed that force Alex to question the motives of all the people in his life. Most importantly, he must decide whether the identity he projects to the world is the man he truly is—or even wants to be.

With its powerful voice, pulse-pounding tension, and strong cast of characters, A Conflict of Interest will captivate readers until its electrifying conclusion.

Praise For A Conflict of Interest…

“MASTERFUL PLOTTING. . . . SHAKES YOUR BEST GUESSES AND PUNCHES YOU IN THE GUT.” —Perri O’Shaughnessy

“PULLS YOU IN DEEPER AND DEEPER. . . . IT’S HARD TO BELIEVETHIS IS MITZNER’S FIRST NOVEL. YOU WILL NOT BE DISAPPOINTED.” —seattlepi.com

“THIS GIFTED WRITER SHOULD HAVE A LONG AND SUCCESSFUL CAREERAHEAD OF HIM.” —Publishers Weekly (starred review)

“A PAGE-TURNER WITH DEEPLY FLAWED HEROES, SYMPATHETICVILLAINS, AND TOTALLY UNEXPECTED TWISTS. I LOVED IT!” —Alan Dershowitz