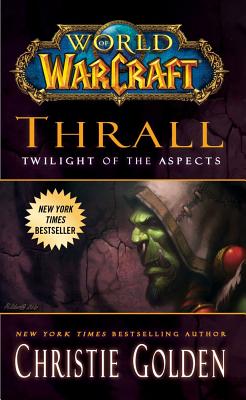 Thrall: Twilight of the Aspects

In this follow-up to her New York Times bestseller, The Shattering, Christie Golden delivers a sensational tie-in to the newest World of Warcraft game expansion, now in paperback!

When Azeroth was young, the noble titans appointed the five great dragonflights to safeguard the budding world. Each of the flights’ leaders was imbued with a portion of the titans' vast cosmic powers. Together, these majestic Dragon Aspects committed themselves to thwarting any force that threatened the safety of Azeroth.

More than 10,000 years ago, a betrayal by the maddened black Dragon Aspect, Deathwing, shattered the strength and unity of the dragonflights. His most recent assault on Azeroth—the Cataclysm—has left the world in turmoil. At the Maelstrom, the center of Azeroth's instability, former Horde warchief Thrall and other accomplished shaman struggle to keep the world from tearing apart in the wake of Deathwing's attack. Yet a battle also rages within Thrall regarding his new life in the shamanic Earthen Ring, hampering his normally unparalleled abilities.

Of even greater concern is a bleak and terrifying possible future glimpsed by the mysterious green Dragon Aspect, Ysera: the Hour of Twilight. Before this apocalyptic vision comes to pass, Thrall must purge his own doubts in order to discover his purpose in the world and aid Azeroth's dragonflights as they face the Twilight of the Aspects.

New York Times bestselling and award-winning author Christie Golden has written more than forty novels and several short stories in the fields of science fiction, fantasy, and horror. Among her many projects are over a dozen Star Trek novels and several original fantasy novels. An avid player of World of Warcraft, she has written two manga short stories and several novels in that world. Golden lives in Tennessee. She welcomes visitors to her website: ChristieGolden.com.
or
Buy Here
Copyright © 2020 American Booksellers Association