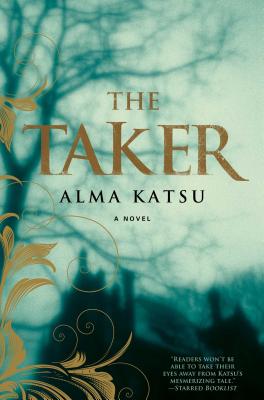 “Readers won’t be able to tear their eyes away from Katsu’s mesmerizing tale.” —Starred Booklist

"Alchemy and love prove a volatile mix in Katsu's vividly imagined first novel ... Katsu shows considerable skill in rendering a world where Adair's unspeakable evilness and Lanny's wild passion make the supernatural seem possible. The result is a novel full of surprises and a powerful evocation of the dark side of romantic love." —Publishers Weekly

“Alma Katsu’s The Taker is a frighteningly compelling story about those most human monsters—desire and obsession. It will curl your hair and keep you up late at night.” —Keith Donohue, bestselling author of The Stolen Child

“Alma Katsu’s searing tale of otherworldly lovers and eternal obsession will seduce you from page one. With its elegant prose and riveting plot, The Taker is as irresistible as the hauntingly beautiful, pleasure-seeking immortals who scorch its pages. A wicked, sensuous, shattering love story that I can’t recommend enough. You have to experience it for yourself!” —Kresley Cole, #1 New York Times bestselling author

"Alma Katsu's debut takes the reader on a spell-binding journey through time. This sensual tale of star-crossed love, betrayal and redemption is a rare and addictive treat. Pleasurable from page one." —Danielle Trussoni, New York Times bestselling author of Angelology

“The Taker is a sexy, dark romance. Alma Katsu’s tale of immortality and unrequited love covers hundreds of years but never strays from this question: What price are we willing to pay to completely possess another?” —Alexi Zentner, author of Touch

“A centuries-spanning epic that will keep you turning pages all night. This marvelous debut is a thinking person’s guilty pleasure.” —Scott Westerfeld, New York Times bestselling author of Leviathan

“This is a great book. And by great, I mean, devastatingly so, like reading The Scarlet Letter, while riding a roller coaster, on acid. Seductive, daring, soaring, and ultimately gut-wrenching, The Taker is a lush, historical rendering of transcendent love, paranormal beings, and the depths of pain that can be felt by immortal hearts.” —Jamie Ford, New York Times bestselling author of Hotel on the Corner of Bitter and Sweet

"It renews a genre...and makes it intimate again." —Locus Magazine


Looking for a good read? Get ready to hear about a time-transcending page turner. Two years ago,having just finished The Vampire Chronicles by Anne Rice and The Twilight Series by Stephanie Meyer, I was still hungry for more of the supernatural. My only hesitation was that I wanted something a little more plausible than blood-sucking vampires. As fate would have it, I stumbled upon The Taker by Alma Katsu. Dutifully, I checked reviews before purchasing the book. How I hadn’t heard of it prior to then is beyond me, as the book was insanely well-receiveda nd only growing in popularity. I took the novel home and was blown away by the captivating story of an impressionable young woman, the “Adonis” who she falls in love with and the “monster” who falls in love with her. Lanore, Jonathan and Adair had me spellbound like no other characters have. The Taker satiated my need for the supernatural, but was unique in it’s portrayal of everlasting love and unrelenting obsession, both of which know no boundaries for these characters. The second installment, The Reckoning, was equally fascinating—the never-ending love chase propelling the jump between several different time periods and beautiful locations all over the world. Finally, the end of this twisted tale will come to an end with Katsu’s final installment, The Descent.
— Jennifer Castro, Cliche Magazine

Alma Katsu was born in Alaska and raised near Concord, Massachusetts. She has a BA in writing from Brandeis University and an MA from the Johns Hopkins Writing Program. She is the author of the Taker trilogy (The Taker, The Reckoning, and The Descent) and The Hunger. She lives with her husband in Virginia. Visit her on Twitter @AlmaKatsu.
Loading...
or
Not Currently Available for Direct Purchase