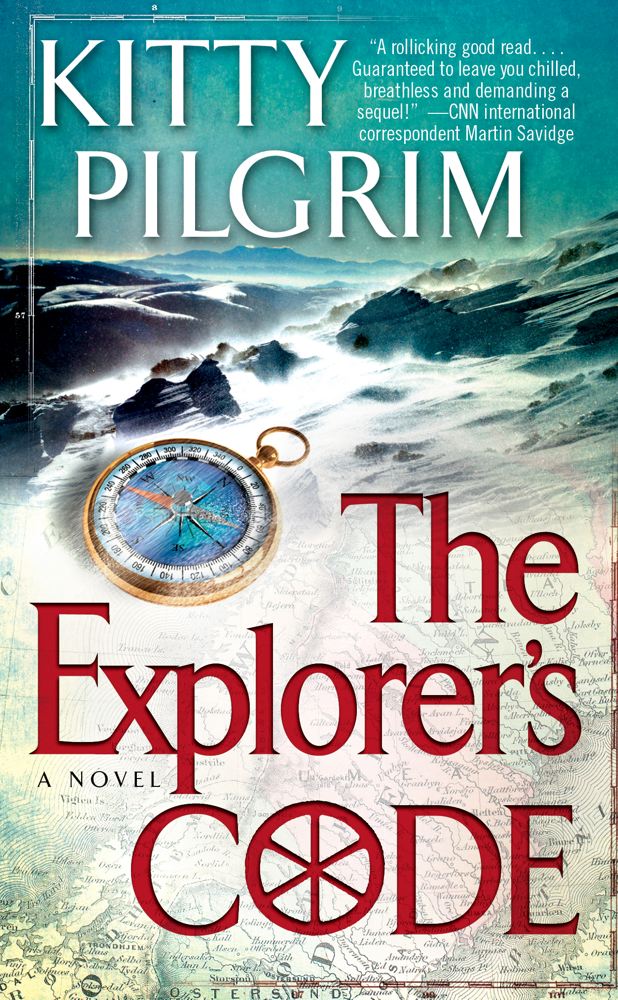 From a veteran CNN anchor and correspondent comes an international thriller with old-fashioned romance and adventure that takes readers from Monaco to Norway in an attempt to find a long-lost property deed that is valuable enough to kill for.

The secrets of an explorer’s journal lead a beautiful oceanographer and a dashing archaeologist on a heart-pounding quest. . . .

When renowned young oceanographer Cordelia Stapleton accepts an award on behalf of her greatgreat- grandfather—a famous Victorian polar explorer—at the dazzling Oceanographic Institute Ball in Monaco, she has no idea of the dramatic changes the night will bring. After the banquet, wealthy archaeologist John Sinclair presents her with a long-lost family heirloom—an Arctic exploration journal from 1908 holding the clue to a valuable land deed. The multi-million-dollar legacy is hers to claim, if she can find the deed. She and John team up for an explosive hunt that sweeps from the glamorous Queen Victoria ocean liner to a dig site in Turkey, from a beautiful old Parisian home to a lavish estate in the British countryside, culminating in the high Arctic archipelago of Svalbard. Behind them every step of the way are a consortium of Russian underworld criminals, Texan religious fanatics, a sinister botanist, and a sexy American spy, all hunting for the deed . . . and all pursuing Cordelia.

Praise For The Explorer's Code: A Novel…

ADVANCE PRAISE FOR THE EXPLORER’S CODE:

“An intelligent thriller based on discovery, exploration, and real scientists….Wonderful characters lead us on a merry chase through some of the most glamorous and sophisticated places in the world. I learned a lot, and couldn’t put it down." —Paula Zahn

“What a page turner! I always knew Kitty Pilgrim could write down and report the facts. Now she has turned her journalistic skills and keen understanding of the world to pen an exciting novel. The Explorer’s Code takes you on a wild ride to exotic places filled with greed, intrigue, suspense and colorful characters -- rich, beautiful people and villains worth hating. Oh - and the heroes are science geeks! There’s nothing more I could ask for from a thriller.” -- Miles O’Brien, Science Correspondent, PBS New Hour

"Captivating characters, scientific intrigue, polar exploration, and romantic tension all wrapped up in a mad dash around the world that will leave you breathless! Only Kitty Pilgrim could so deftly bring together this story of Russian oligarchs, the 1918 flu epidemic, St Paul's letter to the Ephesians, the twisted roads of the Cote D’Azur, and the rarified air of the well-heeled into such a vivid and unforgettable novel. I could not put it down.".


-- Christine Romans, CNN host and author of Smart is the New Rich

“Kitty Pilgrim crafts a rollicking good read in The Explorer’s Code, an intelligent thriller that races from one romantic and exotic dateline to the next, propelled by characters who are smart, sexy and sinister. A must read for anyone who loves adventure with a brain. Guaranteed to leave you chilled, breathless and demanding a sequel!” -- Martin Savidge, International Correspondent, CNN

“By land, by air, by sea...Kitty Pilgrim spins a fast-paced mystery packed with roller-coaster ups and downs and an irresistible heroine like no other -- Cordelia Stapleton.” -- Nancy Grace, Television host and author of Destiny on the D-List

“I love a journey filled with adventure, intrigue and twists and turns. In The Explorers Code, Kitty nailed it. Her character development is flawless and in Cordelia Stapleton is an irresistible intellect and strength that draws you into each moment, page by page. You are just waiting for her to fall in love. This adventure surely doesn't disappoint! I'm already looking forward to what's next from Kitty!” -- AJ Hammer, "Showbiz Tonight" CNN Headline News

"A masterful debut sure to appeal to fans of Iris Johansen and Sandra Brown." —Carol Haggas, Booklist

“By land, by air, by sea...Kitty Pilgrim spins a fast-paced mystery packed with roller-coaster ups and downs and an irresistible heroine like no other -- Cordelia Stapleton.” —Nancy Grace, Television host and author of Destiny on the D-List

Kitty Pilgrim is the author of three novels and a former award-winning correspondent and anchor for CNN. She is the recipient of an Overseas Press Club Award, a Peabody Award, The New York Society of Black Journalists Award, and is a full member of the historic Explorer’s Club. She lives in New York City and Rhinecliff, New York.
Loading...
or
Not Currently Available for Direct Purchase