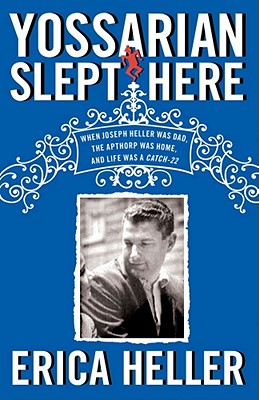 When Joseph Heller Was Dad, the Apthorp Was Home, and Life Was a Catch-22

THROUGHOUT ERICA HELLER’S LIFE, when people learned that Joseph Heller was her father, they often remarked, “How terrific!” But was there a catch? Like his most famous work, her father was a study in contradictions: eccentric, brilliant, and voracious, but also mercurial, competitive, and stubborn, with a love of mischief that sometimes cut too close to the bone. Being raised by such a larger than- life personality could be claustrophobic, even at the sprawling Upper West Side apartments of the Apthorp, which the Hellers called home—in one way or another—for forty-five years.

Yossarian Slept Here is Erica Heller’s wickedly funny but also poignant and incisive memoir about growing up in a family—her iconic father; her wry, beautiful mother, Shirley; her younger brother, Ted; her relentlessly inventive grandmother Dottie—that could be by turns caring, infuriating, and exasperating, though anything but dull. From the forbidden pleasures of ordering shrimp cocktail when it was beyond the family’s budget to spending a summer, as her father’s fame grew, at the Beverly Hills Hotel, Erica details the Hellers’ charmed—and charmingly turbulent— trajectory. She offers a rare glimpse of meetings with the Gourmet Club, where her father would dine weekly with Mel Brooks, Zero Mostel, and Mario Puzo, among others (and from which all wives and children were strictly verboten). She introduces us to many extraordinary residents of the Apthorp, some famous—George Balanchine, Sidney Poitier, and Lena Horne, to name a few—and some not famous, but all quite memorable. Yet she also manages to limn the complex bonds of loyalty and guilt, hurt and healing, that define every family. Erica was among those present at her father’s bedside as he struggled to recover from Guillain-Barré syndrome and then cared for her mother when Shirley was diagnosed with terminal cancer after the thirty-eight-year marriage and intensely passionate partnership with Joe had ended.

Witty and perceptive, and displaying the descriptive gifts of a born storyteller, this authentic and colorful portrait of life in the Heller household unfolds alongside the saga of the family’s moves into four distinctive apartments within the Apthorp, each representing a different phase of their lives together—and apart. It is a story about achieving a dream; about fame and its aftermath; about lasting love, squandered opportunities, and how to have the best meal in Chinatown.

Praise For Yossarian Slept Here: When Joseph Heller Was Dad, the Apthorp Was Home, and Life Was a Catch-22…

“A vital read. [Erica Heller] didn't idolize her father, but she portrays his complexities with sympathy. . . . Feels like all a reader needs to get the feel for the man who wrote, and lived with having written, Catch-22.”—The Los Angeles Times

“For the human aspect [of Joseph Heller], one turns to Erica Heller’s frank but loving memoir of her father, Yossarian Slept Here, which comes as close as possible, I dare say, to deciphering the enigma behind the obsessive, pitch-black fiction. Joseph Heller, the opposite of demonstrative, was given to oblique ways of showing affection [and] such vignettes are all the more charming, and telling, because the author shares her subject’s sense of humor, and is herself a good writer to boot. . . . The miracle of this memoir is that it never seems less than fair: Erica Heller’s worst grievances are mentioned more in sorrow (or levity) than anger, and she’s careful to give her own shortcomings their due. . . . While she was dying of cancer, [Joe Heller’s] ex-wife’s utmost curse was to forbid Erica from ever giving him a coveted pot roast recipe. The daughter kept her promise, though she prints the recipe at the end of her book; for this reason alone—pity Joseph Heller the absence of such pot roast during his final years—I would recommend Yossarian Slept Here.''—Blake Bailey for The New York Times Book Review

“Packed with wonderful anecdotes of a sort that aren't always found in proper biographies.”—Salon.com

“This collection of memories renders all of the pride, dislocation and confusion that follows from a life borne into literary legacy.”—Time Out New York

"With wit punctuating lambent nostalgia, Erica Heller brings her father to life in an animated, absorbing fashion, documenting his quirky habits, celebrity, and "invisible, unfathomable inner cycle," but also her parents' divorce and Heller's suffering with Guillain-Barré syndrome. The total effect is akin to leafing through a bulging family scrapbook where one finds a few blurry images among many snapshots in sharp focus. Erica Heller has inherited her father's finely tuned flair with words."—Publishers Weekly

“Comedic and poignant, her many-faceted memoir is rendered in high-definition as Heller recounts meals, travels, parties, arguments, lies, and the serious illnesses that afflicted her and her parents. Writing with wit, compassion, [and] aplomb, and no little wonder . . . Heller presents an involving and invaluable work of personal and cultural history.”— Donna Seaman, Booklist

"An affectionate family scrapbook crafted with a bittersweet blend of humor and pathos."—Kirkus Reviews

“Readers might wonder if Erica Heller will have anything new to say about her famous father. The answer is: absolutely. . . . Rather than focus on [Joseph Heller's] genius, she fleshes out his personality and their relationship. . . . While most of our parents are mere mortals, Heller's tale of trying to meet parental expectations while finding her own path will resonate with readers everywhere.”—Shelf Awareness

“As a rule, a novel speaks for itself and its author, but when it comes to Joseph Heller, we are privileged to have an especially intimate source of information about his life and work. . . . Erica [Heller] clearly shares her father’s wry sense of humor and his gift for storytelling. . . . Yossarian Slept Here is a must-read for anyone who delights in finding out exactly how our favorite books entered the world.”—The Jewish Journal

“Erica Heller has clearly inherited her way with words from her father, and her wry, sometimes mordant viewpoint as well.”—New York Journal of Books

“Yossarian Slept Here is a finely crafted, wonderfully observed reminiscence on an extraordinary, often traumatic life. . . . You sense the fear of a man who, in his daughter, detects a potential rival: somebody of great imagination and eloquence, in whom he has privately identified a writer with great promise. That last quality, in Yossarian Slept Here, radiates off the page.”—The Independent (UK)

"Erica Heller, daughter of Catch-22 author Joseph Heller, seems to have weathered her girlhood better than most daughters of celebrated literary lions. As we know from the memoirs of Susan Cheever, Janna Malamud Smith and Alexandra Styron, growing up under the shadow of an artistic ego can seriously stunt your emotional health. Heller's book shows a robust acceptance of her father's overbearing personality and Don Draperesque approach to marriage and fatherhood."—Arts & Book Review (UK)

“An intriguing take on the saga of a celebrity-author dad and his long-suffering family.”—Winnipeg Free Press

“Erica Heller has a story to tell and I for one am eager to see it in print. I think this is going to be one hell(er) of a memoir.”—Christopher Buckley, author of Losing Mum and Pup

“As soon as I read the opening I was determined and eager to consume everything that followed, up to and including the Pot Roast.”—Christopher Hitchens, author of Hitch-22

“Erica Heller to me is like a Carrie Fisher on the East Coast. She is as authentic as they come."—Richard Lewis, comedian, actor, author