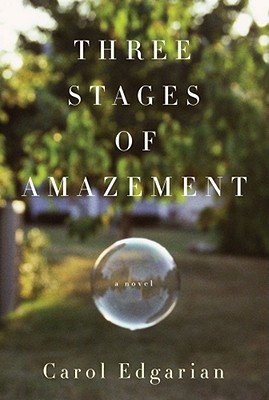 A sweeping, richly compassionate novel about marriage, ambition, and the reclaiming of love—by the bestselling novelist and cofounder of Narrative magazine.

Many love stories end in marriage; rare is the love story that begins with one—already promised, already worn.  Set in San Francisco during the first year of Obama’s presidency, Three Stages of Amazement deftly charts the struggles and triumphs of Lena Rusch and her husband Charlie Pepper, still believe they can have it all--sex, love, marriage, children, career, brilliance. But life delivers surprises and tests--a stillborn child, an economic crash, a ruthless business rival and the attentions of an old lover. Touched by tragedy and by ordinary hopes unmet, Lena and Charlie must face, for the first time in their lives, real limitation.

Fifteen years after her stunning debut, Rise the Euphrates, Carol Edgarian has created a panoramic and deeply moving story about business and family and the demands of love in our time. She takes readers on a spellbinding journey inside America today, with an unforgettable cast of characters including Cal Rusch, Lena’s uncle, a Silicon Valley titan, and Ivy, his socialite wife, who engender complication in the lives of all the people they touch: their grown children, business partners, friends, the servants and workers upon whom the glamorous life depends--and Lena, whose quest for grace is the pulse of this gorgeous novel.

As Lena and Charlie, Ivy and Cal, face the temptations of their youth and the fantasy of the redo, they discover that real life is the ultimate challenge. Told with eloquence and compassion, Three Stages of Amazement is a true thriller of the heart, a riveting story about confronting adversity, gaining wisdom, and finding great love.

“A lovely, resonant novel… This story feels universal. Not to mention generous and graceful and true.”—O, the Oprah magazine

"Carol Edgarian's novel is a book about grown-ups for grown-ups. Given that we never really grow up, yet have to make our way in the world, it ends up being thought provoking, intelligent, wise, sad, and illuminating. If that makes it sound too lofty, it's not: it's humane and therefore sometimes funny, and it nails the complexities of adulthood with a steel hammer held gently in very capable hands."—Ann Beattie, author of Walks with Men and The New Yorker Stories

“Love, family, marriage, illness and money--this is a life story and a love story for our era, beautifully observed, sharply etched by a master storyteller.”—Amy Bloom, author of Away and Where the God of Love Hangs Out

"In Three Stages of Amazement, Carol Edgarian gives you a brilliant and irresistible look at married life and happiness and the very human limitations of both. She's a wonderful writer."--James Salter, author of Light Years and A Sport and a Pastime

“It’s a great heart in a great author who loves the villains in a story while fully imbuing the heroes with human flaws and hungers… Seldom have such a true portraits of our era, or any era, appeared.”—Rick Bass, author of Where the Sea Used to Be and Why I Came West

“A lovely, resonant novel… This story feels universal. Not to mention generous and graceful and true.”—O, the Oprah magazine

""In this gorgeously written, haunting and often hilarious novel, Carol Edgarian conjures a particular moment in America's recent history and unleashes within it a collision of universal forces: love, desire, ambition, loyalty. I can't think of a book that more viscerally evokes the gritty challenge-and casual heroism-of motherhood and marriage."--Jennifer Egan, author of A Visit from the Goon Squad

Carol Edgarian is author of the novels Three Stages of Amazement and the best-selling Rise the Euphrates, winner of the ANC Freedom Award.  Her articles and essays have appeared in many national magazines, and she co-edited the popular collection drawn from great writers' diaries, The Writer's Life: Intimate Thoughts on Work, Love, Inspiration, and Fame. She is co-founder, editor and publisher of the non-profit magazine Narrative (www.NarrativeMagazine.com) and Narrative in the Schools, a program to encourage reading and writing in schools across America.  She lives in San Francisco with her husband, Tom Jenks, and their three daughters.