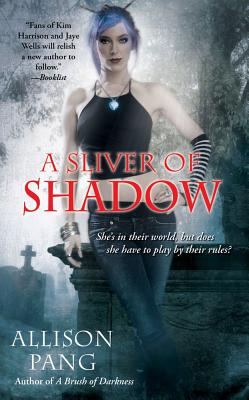 A Sliver of Shadow

Following A Brush of Darkness, the second novel in a dark, fun, and sexy urban fantasy series—featuring a mortal heroine deeply enmeshed in a magical OtherWorld that she’s just learning to navigate.

WAR IS HELL. AND WAR WITH HELL IS NO FUN EITHER.
Just when her new life as a TouchStone—a mortal bound to help OtherFolk cross between Faery and human worlds—seems to be settling down, Abby Sinclair is left in charge when the Protectorate, Moira, leaves for the Faery Court. And when the Protectorate’s away...let’s just say things spiral out of control when a spell on Abby backfires and the Faery Queen declares the Doors between their worlds officially closed. The results are disastrous for both sides: OtherFolk trapped in the mortal world are beginning to fade, while Faery is on the brink of war with the daemons of Hell. Along with her brooding elven prince Talivar and sexy incubus Brystion, Abby ventures to the CrossRoads in an attempt to override the Queen’s magic. But nothing in this beautiful, dangerous realm will compare to the discoveries she’s making about her past, her destiny, and what she will sacrifice for those she loves.

Allison Pang is the author of the urban fantasy Abby Sinclair series, as well as the writer for the webcomic Fox & Willow. She likes LEGOS, elves, LEGO elves…and bacon. She spends her days in Northern Virginia working as a cube grunt and her nights waiting on her kids and cats, punctuated by the occasional husbandly serenade. Sometimes she even manages to write. Mostly she just makes it up as she goes.
Loading...
or
Not Currently Available for Direct Purchase