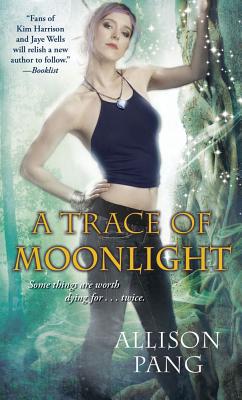 A Trace of Moonlight

From the author of A Brush of Darkness and A Sliver of Shadow comes the third book in a smart, sexy, urban fantasy series.

Drinking from the waters of lethe and offering herself up as Faerie’s sacrificial Tithe . . . these just might be the least of Abby Sinclair’s problems.

Abby’s pact with a daemon—whether or not she remembers making it—is binding, so she’d better count herself lucky that (in the words of a daemon who knows better) there’s nearly always a loophole. But her friends’ reckless attempts to free her, well intentioned though they may be, set off a disastrous chain of events. In no time at all, Abby turns her incubus lover mortal, then gets herself killed, cursed, and married to an elven prince whose mother wants her dead. On top of everything else, she’s lost the Key to the CrossRoads to her mortal enemy, who promptly uses his restored power to wreak havoc on the OtherWorld and put its very existence in jeopardy. Only one person can make things right again, but to find her, Abby must place her trust in allies of mixed loyalties, and conquer her nightmares once and for all.

Allison Pang is the author of the urban fantasy Abby Sinclair series, as well as the writer for the webcomic Fox & Willow. She likes LEGOS, elves, LEGO elves…and bacon. She spends her days in Northern Virginia working as a cube grunt and her nights waiting on her kids and cats, punctuated by the occasional husbandly serenade. Sometimes she even manages to write. Mostly she just makes it up as she goes.
Loading...
or
Not Currently Available for Direct Purchase