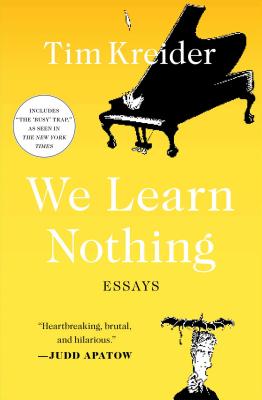 “We Learn Nothing articulated, for me, more human truths than any book in recent memory. When you’re done with it, it almost feels like finishing a textbook: you actually feel like you understand how things work a little better.”
— PublishersWeekly.com

Tim Kreider has written for The New York Times, The New Yorker, The Week, The Men’s Journal, and Nerve.com. His popular comic strip, The Pain—When Will It End?, ran in alternative weeklies for twelve years and has been collected in three books by Fantagraphics. He is the author of two collections of essays, We Learn Nothing and I Wrote This Book Because I Love You. He divides his time between New York City and an undisclosed location on the Chesapeake Bay.
Loading...
or support indie stores by buying on