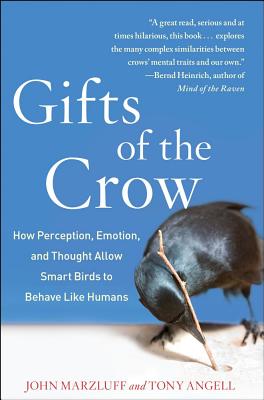 CROWS ARE MISCHIEVOUS, playful, social, and passionate. They have brains that are huge for their body size and exhibit an avian kind of eloquence. They mate for life and associate with relatives and neighbors for years. And because they often live near people—in our gardens, parks, and cities—they are also keenly aware of our peculiarities, staying away from and even scolding anyone who threatens or harms them and quickly learning to recognize and approach those who care for and feed them, even giving them numerous, oddly touching gifts in return.

With his extraordinary research on the intelligence and startling abilities of corvids—crows, ravens, and jays—scientist John Marzluff teams up with artist-naturalist Tony Angell to tell amazing stories of these brilliant birds in Gifts of the Crow. With narrative, diagrams, and gorgeous line drawings, they offer an in-depth look at these complex creatures and our shared behaviors. The ongoing connection between humans and crows—a cultural coevolution—has shaped both species for millions of years. And the characteristics of crows that allow this symbiotic relationship are language, delinquency, frolic, passion, wrath, risk-taking, and awareness—seven traits that humans find strangely familiar. Crows gather around their dead, warn of impending doom, recognize people, commit murder of other crows, lure fish and birds to their death, swill coffee, drink beer, turn on lights to stay warm, design and use tools, use cars as nutcrackers, windsurf and sled to play, and work in tandem to spray soft cheese out of a can. Their marvelous brains allow them to think, plan, and reconsider their actions.

With its abundance of funny, awe-inspiring, and poignant stories, Gifts of the Crow portrays creatures who are nothing short of amazing. A testament to years of painstaking research and careful observation, this fully illustrated, riveting work is a thrilling look at one of nature’s most wondrous creatures.

"A great read, this book is a tribute to the little-known and underappreciated minds of the birds of the amazing corvid family. Serious and at times hilarious, it pulled me in with its telling anecdotes and scientific context. Most importantly, it acknowledges and explores the many complex similarities between crows' mental traits and our own." --Bernd Heinrich, author of Mind of the Raven

“Researchers writing about comparative human and nonhuman cognition always make brief, obligatory reference to the underlying neurological and hormonal systems, but Marzluff and Angell actually provide us with the details. In lucid, logical, and articulate prose, they carefully explain all the interrelated mechanisms involved in the fascinating behavior patterns of their corvid subjects and how these mechanisms relate to those of humans. Their book is indeed a gift, not only to those of us eager to learn about corvid behavior but also but also to those who wish to understand the bases for these actions.” –Irene M. Pepperberg, author of Alex & Me: How a Scientist and a Parrot Uncovered a Hidden World of Animal Intelligence--and Formed a Deep Bond in the Process

“John Marzluff and Tony Angell's amazing, true stories of crows who rage, grieve, give gifts, work together, and even design and use tools would be enough to make this book a great read. But these maverick scientists go a step further, and actually show how these birds' big brains, though different from our own, achieve many of the same feats. Gifts of the Crow is a gift to all of us who have argued for years that humans don't possess the only minds in the universe. This is one of the most exciting books I've read in a long time.” --Sy Montgomery, author of Birdology

"In this important work, you’ll find stunning examples of crow emotionality and intelligence -- a triumphant vindication for those who have known all along that animals are capable of much more than they’re generally given credit for. Crows dream as part of their learning process, for instance, and profile other individuals’ behavior and act accordingly. In many ways, their intelligence is equal to that of the great apes. Fascinating." --Stacey O'Brien, author of Wesley the Owl

“Gifts of the Crow is a compelling book. Filled with wonderful stories of regular people’s interactions with ravens, crows, and jays, it also cites engrossing scientific studies, reports on the field work of biologists, and offers detailed explanations of how the brain of a corvid actually works. I was fascinated.” -- Suzie Gilbert, author of Flyaway: How A Wild Bird Rehabber Sought Adventure and Found Her Wings

"Throughout much of human history crows have been our constant companions. In their exciting new book, Marzluff and Angell, show us how crows brains work, while providing the evidence that these cerebral birds have a lot more in common with us than we ever imagined. And Angell's illustrations alone make the book worth the price." --Paul R. Ehrlich, co-author of The Birder's Handbook