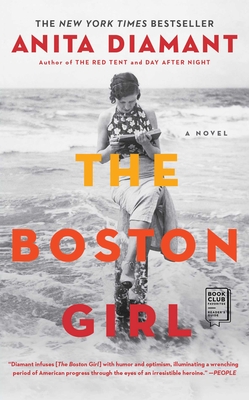 Written with the same attention to historical detail and emotional resonance that made Diamant’s previous novels bestsellers, The Boston Girl is a moving portrait of one woman’s complicated life in twentieth century America, and a fascinating look at a generation of women finding their places in a changing world. “Diamant brings to life a piece of feminism’s forgotten history” (Good Housekeeping) in this “inspirational…page-turning portrait of immigrant life in the early twentieth century” (Booklist).

“The Boston Girl convincingly traces the story of a scrappy, intelligent immigrant, who does more than merely survive the 20th century; she embraces it all—tragedies, joys, and the humdrum—with unflagging passion.”
— Miami Herald

"Addie is…a good storyteller, and her descriptions of the human devastation of World War I and the flu epidemic … have an immediacy that blows away any historical dust."
— USA Today

“Anita Diamant’s The Boston Girl introduces[a] woman of substance…[who] relates how growing up in a time of gender inequality, strict family expectations, and a widening generation gap of social values made her a successful person.”
— Boston Herald

“A vivid, affectionate portrait of American womanhood …Diamant has built her career on taking women seriously, and Addie Baum is another strong heroine with an irrepressible voice.”
— Los Angeles Times

“This compelling new novel by the author of the book club favorite The Red Tent (1997) also celebrates a woman’s story.”
— Dallas Morning News

“An exploration of the immigrant experience, love,marriage and friendship, plus many significant world events, including World War I and II, Prohibition, the Spanish flu epidemic, civil rights and the sexual revolution. Through it all, family and friendship remain resilient.”
— Fort Worth Star-Telegram

“A gripping story of a young Jewish woman growing up in early-20th-century Boston. . . A stunning look into the past with a plucky heroine readers will cheer for.”
— Publishers Weekly

“Diamant offers impeccable descriptions of Boston life during those early years of the 20th century and creates a loving, caring lead character who grows in front of our eyes.”
— Library Journal

"A beautiful novel that captures yourheart."
— The Jerusalem Post

Anita Diamant is the bestselling author of the novels The Boston Girl, The Red Tent, Good Harbor, The Last Days of Dogtown, and Day After Night, and the collection of essays, Pitching My Tent. An award-winning journalist whose work appeared in The Boston Globe Magazine and Parenting, and many others, she is the author of six nonfiction guides to contemporary Jewish life. She lives in Massachusetts. Visit her website at AnitaDiamant.com.
Loading...
or support indie stores by buying on