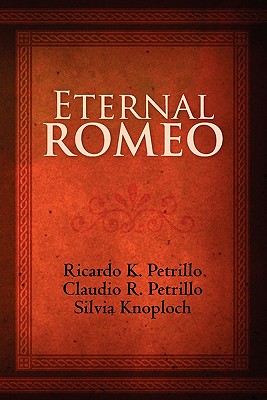 This is the fourth book by Ricardo Petrillo, who passed away at age twenty after a tragic fall at college. Ricardo 'dictates' to his father through a process referred to as channeling. In his previous books Ricardo described his experiences in the spiritual world (Eternal Bonds of Love), took his parents during their sleep on a journey through different spiritual realms (Poems for a Better World) and showed us the many facets and power of love (Poems of Love). "Eternal Romeo is an epic where historical facts and fiction merge in a kaleidoscope of feelings and emotions, and lives are all interconnected in the continuous process of rebirth. From Hannibal to Romeo we would hope to project the evolution of a soul in the eternal pilgrimage toward our Divine Source." Ricardo attempts to reveal in this book "the effects that our acts inflict on others ...], and that we are ultimately accountable for their consequences." ...] "It is the purpose of this work to dispel the idea that taking one's own life might be justified in some instances, whether for love, for honor, or in desperation." ...] "Who we are today reflects what we did yesterday, and who we will be tomorrow will reflect what we did today." " ...] may the message be spread in our simple poems that life is sacred, divine, granted to us as a blessing, as our means to evolve, to expand our knowledge and spiritual potential so that one day we will all be part of a different world where greed, hatred, selfishness, and envy will be replaced by fraternity and love.