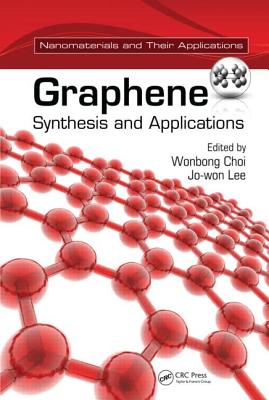 In contrast to research on its excellent electronic and optoelectronic properties, research on the syntheses of a single sheet of graphene for industrial applications is in its nascent stages. Graphene: Synthesis and Applications reviews the advancement and future directions of graphene research in the areas of synthesis and properties, and explores applications, such as electronics, heat dissipation, field emission, sensors, composites, and energy.

Wonbong Choi is a professor in the Mechanical and Materials Engineering Department at Florida International University and an extraordinary visiting professor at WCU Department of Energy Engineering, Hanyang University. Choi was awarded the prestigious Materials Research Society (MRS) Medal in 2006 "for important developments in the materials science and applications of carbon nanotubes.", and the title of MRS fellow in 2009. One of the remarkable achievements in his research career was the invention of the Carbon Nanotube Field Emission Display, which was reported in Science and was covered extensively by news media around the world. In addition, Dr. Choi is credited with developing the high-efficiency Li-ion battery based on carbon nanotubes, vertical CNT-Field Effect Transistor and CNT based non-volatile memory devices. Dr. Choi is the author/co-author of over 70 patents (granted or applied), four book chapters, over 100 journal papers, and over 50 conference proceedings. He has been invited to share his technological findings and know-how at many international conferences, and has served as a chair/committee member for several international meetings including IEEE-Nano, TMS-Nano symposium, US-Korea Nanoworkshop and US-Korea Micro and Nano integrated Systems. Jo-won Lee is a chair professor at Hanyang University. His fields of research are primarily nanoelectronics (CNT, nano-flash memory) with a variety of experiences such as magnetic recording media/head, high Tc superconducting films and devices, diamond thin films and devices. Prior to his current position, Prof. Lee was director of the National Program for Tera-level Nanodevices (2000-2010) and was a general manager and then a project manager at the Samsung Advanced Institute of Technology (1992-2000). He has been serving as an editor-in-chief of Korea Nanotechnology Annul and of Nanotechnology Glossary since 2003. He has served as Chair of NANO KOREA 2006, 2007, 2008 and 2009 Symposium Steering Committee, and served as a general chair of the IEEE-Nanotechnology Conference 2010.Dr. Lee has authored and co-authored 92 papers/proceedings and holds 48 patents. He was listed in Who's Who in the World (1994/1995 edition). He received an alumni special award from Hanyang university for his leadership in nanotechnology (December 2001) and David McFarland award from Penn State Chapter of ASM International (April, 2003) for his achievement on metallurgy. He was appointed as one of 2004 role models in science by Korea Science Foundation, Dong-Ailbo and Dong-A Science. Korean government gave him a national honor medal for his contribution to the advancement of nanotechnology in Korea (April 2006).
or support indie stores by buying on
Copyright © 2020 American Booksellers Association