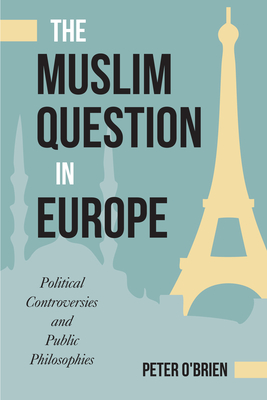 The Muslim Question in Europe

An estimated twenty million Muslims now reside in Europe, mostly as a result of large-scale postwar immigration. In The Muslim Question in Europe, Peter O’Brien challenges the popular notion that the hostilities concerning immigration—which continues to provoke debates about citizenship, headscarves, secularism, and terrorism—are a clash between “Islam and the West.” Rather, he explains, the vehement controversies surrounding European Muslims are better understood as persistent, unresolved intra-European tensions.

O’Brien contends that the best way to understand the politics of state accommodation of European Muslims is through the lens of three competing political ideologies: liberalism, nationalism, and postmodernism. These three broadly understood philosophical traditions represent the most influential normative forces in the politics of immigration in Europe today. He concludes that Muslim Europeans do not represent a monolithic anti-Western bloc within Europe. Although they vehemently disagree among themselves, it is along the same basic liberal, nationalist, and postmodern contours as non-Muslim Europeans.


Praise For The Muslim Question in Europe: Political Controversies and Public Philosophies…

“Reflecting a stunningly broad range of erudition resulting from decades of research, The Muslim Question in Europe provides an antidote for those grappling to understand the myriad migration-related challenges faced by Europeans. O’Brien contends that the complexities are best explicated by viewing the issues through a Kulturkampf lens pitting liberal, nationalist, and post-modernist insights against or complementary to one another. Of special interest is the timely chapter on terrorism and security. Here, too, he discerns a pattern of normative Kulturkampf and policy messiness. He views this outcome as very European. Islam, after all, is of Europe too.”—Mark J. Miller, University of Delaware and co-author of The Age of Migration

“Peter O’Brien discusses the huge amount of research on the major controversies surrounding Islam and Muslims in Europe when it comes to secularism, women’s rights, citizenship, and terrorism. He shows how and why these controversies reveal the inherent contradictions and dilemmas of European identities as much as they shed light on the so called ‘exceptionalism’ of Islam. The Muslim Question in Europe will be very relevant to students and scholars of religion, comparative politics, and immigration.”— Jocelyne Cesari, author of  The Awakening of Muslim Democracy

“A thought-provoking and fresh look at the history of ideas that have shaped Europeans’ encounter with the historic settlement of Muslim minorities in Western Europe. O’Brien is an able guide to the best research in philosophy and the social sciences as he explores the nuances of western cultural contexts. The Muslim Question in Europe combines rich normative and empirical analyses that shed light on unresolved conflicts in European nation-states.”—Jonathan Laurence, author of The Emancipation of Europe’s Muslims and Integrating Islam