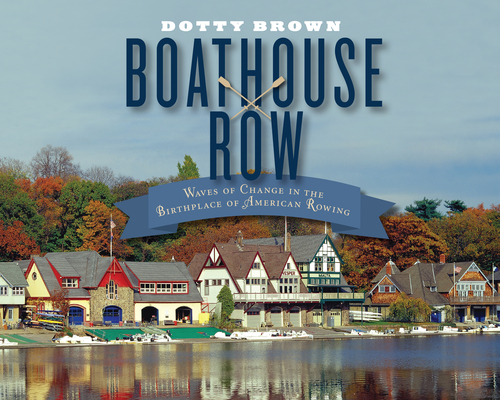 Waves of Change in the Birthplace of American Rowing

The history of Philadelphia’s Boathouse Row is both wide and deep.Dotty Brown, an avid rower and former editor at the Philadelphia Inquirer, immersed herself in boathouse archives to provide a comprehensive history of rowing in Philadelphia. She takes readers behind the scenes to recount the era when rowing was the spectator sport of its time—and the subject of Thomas Eakins’ early artwork—through the heyday of the famed Kelly dynasty, and the fight for women to get the right to row. (Yes, it really was a fight, and it took generations to win.)

With more than 160 photographs, a third of them in full color, Boathouse Row chronicles the “waves of change” as various groups of different races, classes, and genders fought for access to water and the sport. Chapters also discuss the architectural one-upmanship that defined Boathouse Row after Frank Furness designed the stunning and eclectic Undine Barge Club, and the regattas that continue to take place today on the Schuylkill River, including the forgotten forces that propelled high school rowing.

Beautifully written and illustrated, Boathouse Row will be a keepsake for rowers and spectators alike.


Praise For Boathouse Row: Waves of Change in the Birthplace of American Rowing…

"Boathouse Row is a must-read for anyone interested in the sport of rowing and the enormous contributions of those who once plied the Schuylkill River. Dotty Brown chronicles not only the famous athletes of yore, like John B. Kelly, but those noteworthy artists, architects, businessmen, and politicians who helped to build this historic piece of riverbank into the living dynasty that it remains today. With the deft hand of a skilled writer, she unravels a Philadelphia story filled with fascinating characters, revealing new insights on old stories that have remained shrouded in mystery, and supplements her narrative with beautiful artwork and photography."—Daniel J. Boyne, author of Kelly: A Father, a Son, an American Quest

Dotty Brown is a former reporter and editor at The Philadelphia Inquirer. During her newspaper career, she edited numerous prize-winning projects, including one that won a Pulitzer Prize. She is also a member of the Vesper Boat Club. Visit her online at www.boathouserowthebook.com.