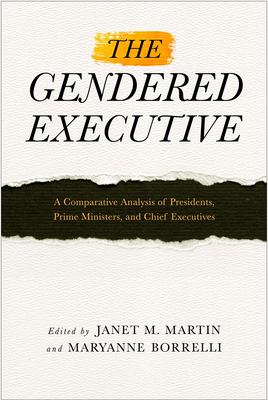 A Comparative Analysis of Presidents, Prime Ministers, and Chief Executives

Excluded from the ranks of elite executive decision-makers for generations, women are now exercising power as chiefs of government and chiefs of state. As of April 2016, 112 women in 73 countries have served as presidents or prime ministers.

The Gendered Executive is a critical examination of national executives, focusing on matters of identity, representation, and power. The editors and contributors to this volume address the impact of female executives through political mobilization and participation, policy- and decision-making, and institutional change. Other topics include party nomination processes, the intersectionality of race and gender, and women-centered U.S. foreign policy in southern Africa. In addition, case studies from Chile, India, Portugal, and the United States are presented, as are cross-national comparisons of women leaders in Latin America.

The Gendered Executive will enhance our understanding of the complexity of gender in  and comparative analyses of executive politics.

Janet M. Martin is Professor of Government and Legal Studies at Bowdoin College; author of The Presidency and Women: Promise, Performance, and Illusion and Lessons from the Hill: The Legislative Journey of an Education Program; and co-editor of The Other Elites: Women, Politics, and Power in the Executive Branch.

MaryAnne Borrelli is Professor of Government at Connecticut College; author of The Politics of the President’s Wife and The President’s Cabinet: Gender, Power, and Representation; co-author of the fourteenth edition of Understanding American Government; and co-editor of The Other Elites: Women, Politics, and Power in the Executive Branch.