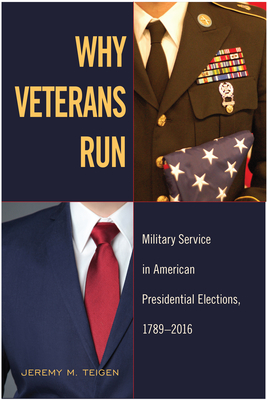 In Why Veterans Run, Jeremy Teigenexplains the tendency of parties to elevate those with armed forces experience to run for high office. He describes the veteran candidate phenomenon by examining the related factors and patterns, showing why different eras have more former generals running and why the number of veterans in election cycles varies. With both quantitative and qualitative analysis, Why Veterans Run investigates each postwar era in U.S. electoral history and elaborates why so many veterans run for office. Teigen also reveals how election outcomes with veteran candidates illuminate the relationship between the military and civilian spheres as well as the preferences of the American electorate.

"Teigen gives us, in blessedly jargon-free prose, a much needed taxonomy of military veterans in presidential election politics. He tells us when they run, how they run, and what happens when they do. He gives us clarifying charts and graphs; a straightforward roadmap which he faithfully follows; case studies; and a wealth of well-researched insights that will illuminate and enlarge the knowledge of academic, veteran, and layperson alike. He shows how veterans have always responded to larger social and political currents, and how underneath it all, veteran identity is entwined with a perceived patriotic identity thanks to the inseparable role the military played in the formation of the American nation."--American Interest