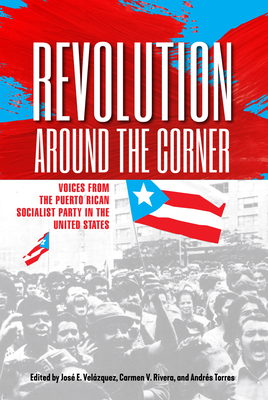 Revolution Around the Corner

Voices from the Puerto Rican Socialist Party in the U.S.

Active from the late 1960s until the mid-1990s, the U.S. branch of the Puerto Rican Socialist Party (PSP) worked simultaneously to build support for Puerto Rican independence and to engage in radical social change within the United States.

Revolution Around the Corner chronicles this unique social movement, describing various mass campaigns and the inner workings of the organization. The editors and contributors—all former members, leaders, and supporters of the PSP—offer a range of views and interpretations of their experience.

Combining historical accounts, personal stories, interviews, and retrospective analysis, Revolution Around the Corner examines specific actions such as the National Day of Solidarity (El Acto Nacional), the Bicentennial without Colonies, the Save Hostos struggle, and the Vieques campaign. Testimonies recount the pros and cons of membership diversity, as well as issues of loyalty and compañerismo. In addition, essays describe the PSP’s participation in coalitions and alliances with Left and progressive movements. The book concludes with the editors’ reflections on the PSP’s achievements, mistakes, and contributions.

José E. Velázquez is a lifelong activist for social justice in the U.S. and Puerto Rican independence, and is co-editor with Andrés Torres of The Puerto Rican Movement: Voices From the Diaspora (Temple).  His opposition to the Vietnam War in the early 1970's resulted in an important legal case in United States v. José Emiliano Velazquez. José is a retired educator and curriculum writer from the Newark Public Schools. A presenter at the founding of the Amistad Commission of NJ, he often lectures on Afro-Latino issues.
Carmen V. Rivera recently retired after having served as a Certified Life Coach and capacity building consultant for over 25 years. A public health policy advocate, she held top ranking positions in New York City government and for the City of Boston. Her activism has centered on women’s rights, national liberation and social justice movements. One of her personal passions is documenting the history of Puerto Rican political activism in the U.S. from the 1960s to early 1990s. She directs the Recovering History Project and its archival collection on the Puerto Rican Socialist Party in the U.S.
Andrés Torres is the author or editor of Between Melting Pot and Mosaic: African Americans and Puerto Ricans in the New York Political Economy; The Puerto Rican Movement: Voices from the Diaspora, and Latinos in New England (all Temple). He is also the author of the memoir Signing in Puerto Rican: A Hearing Son and His Deaf Parent.