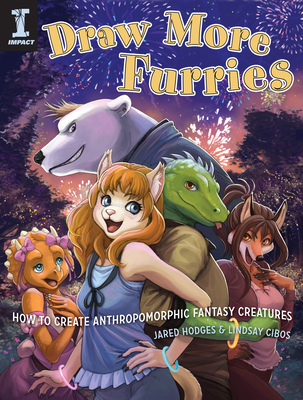 How to Create Anthropomorphic Fantasy Creatures

Furries are so much fun to draw, people have been doing so for thousands of years. By crossing animal traits with human, you can create some fantastic characters with distinct personalities.

The authors of Draw Furries bring you more of the best step-by-step lessons for creating anthropomorphic characters. You'll learn everything from furry anatomy, facial expressions and poses to costumes, coloring and settings! You'll also learn how to create characters that convey the various personalities and spirits of the animals they resemble. Draw More Furries is packed with 20 new furries, "scalies," and mythological creatures with lessons covering everything from drawing mouths and muzzles to paws, feathers and fur. The anthropomorphic creatures you can create with these easy-to-learn lessons are limitless!

But you won't just stop there. Lindsay and Jared take you to the next level by showing you how to build a scene from start to finish. From dinosaur warriors to snow leopard pirates, you'll be drawing all kinds of fun, furry friends in no time!

• Loaded with more than 50 step-by-step demonstrations for a variety of characters from furries to mythological creatures.
• Extended demonstration shows how to build a scene from initial concept drawings and character development to a final colored scene.
• See a variety of different styles of art from guest artists who share their processes for creating lively characters.

Lindsay Cibos and Jared Hodges are the authors of IMPACT's Draw Furries. They are the creators of the graphic novel series Peach Fuzz (Tokyopop), which has been published internationally and syndicated in newspapers.
Loading...
or support indie stores by buying on